Life-long Service to the Sick and Wounded

On March 27, 1896, Gertrud Kegler, second daughter of Pastor Carl Kegler, was born at home in the parsonage of Grünewald, Pomerania. She attended the local elementary school from 1902 to 1905. For the following three years she received private instructions in a neighboring village to prepare her for the all girls’ high school in Stettin (Szczecin). Like all the other Kegler children she was confirmed by her father in the village church of Grünewald. It must have been a great joy for Pastor Kegler to see his three lovely daughters sitting in the front pew, while he was delivering his Sunday sermon from the pulpit. He endearingly called Marie, Gertrud and Erika (my mother) his three lilies.

After graduation from high school she took nurses’ training in Neustettin (Szczecinek) and obtained certification as a registered nurse in 1919. For almost 20 years she worked as a member of the sisterhood of the Johanniter Order. The Order’s regulations have worded this command as, “The Johanniter answers the call, where the suffering of his neighbor awaits his act of love, and where the irreligion of the afflicted demands that he witness his faith.”

During the Second World War she worked from 1939 to 1945 in a military field hospital at Thorn (Torun) tending to the needs to the sick, disabled and injured. This came to a sudden end, when the advancing Red Army forced the medical administration to close down the hospital. Gertrud fled with her colleagues and managed to reach Stolpmünde (Ustka), where my grandmother Elisabeth and Aunt Marie were renting a small apartment. Shortly after,through a kind of ethnic cleansing all Germans in Pomerania and all the other eastern provinces were expelled from their homeland. So the three eventually arrived in Middle Germany, what later  came to be known as the German Democratic Republic. 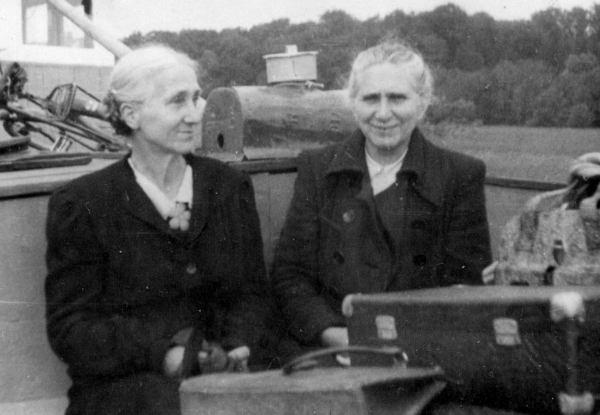 Mother and Aunt Gertrud on the Right

After the war from 1945 to 1947 Gertrud Kegler continued to work as a nurse in Belsen-Bergen, where nearby the infamous Nazi concentration camp was located. In 1948, the chief physician, who had worked with Gertrud in Thorn, West Prussia, remembered her as a highly qualified and competent nurse. He asked her to join his staff at the hospital in Malchin. There she was employed as head nurse. She helped under most difficult circumstances to build up the medical facilities of the hospital.

My wife Biene already described in her fascinating blog ‘This Miraculous Life’ at bieneklopp.com the lure of the ‘Golden West’. In addition to the attraction of greater freedom and prosperity in West Germany, there was a third factor that prompted my aunt to cross the Iron Curtain. Her sister Marie, who lived with my mother and me in Wesel from 1956 to 1962, had noticed an ad in the local newspaper for the position of a head nurse in a senior citizens’ home and alerted her Gertrud to the opportunity to start a new life in Wesel. When my aunt arrived in 1956, the three sisters were finally reunited.

However, what could have been a joyful period for the three, ended in tragedy. On her time off from work, Gertrud would often drop in at our small two-bedroom apartment on the street corner of ‘Auf dem Dudel 1’. Stress from the new and very challenging position as head nurse was written all over her face. It was not just the tremendous workload in a totally different environment that caused her a lot of grief. It was rather the envious and ill feelings her staff had toward the Ossie (slang for someone from East Germany) that gave her so much pain. Also they may not have liked the conscientious attitude of their supervising nurse, who put the care and well-being of the elderly front and center before comfort and ease at the work place. Gertrud did not mince words when it came to correct sloppiness and negligence in the treatment of the most vulnerable in her care. She may also have suffered under depression, which had struck on and off quite a few members of the Kegler family when they had been under great duress and mental strain. After one year of suffering she could not take it anymore. She committed suicide on February 21, 1957. I was not yet 15 years old at the time. Not having a concept of death as a final event for us here on earth, I was not overly shocked by her parting. I remember her as the kind aunt with enormous eye brows, who liked to listen to me, when I was reading aloud from my Latin reader.

This is a journal about the things that inspire me: a beautiful landscape, a good book, a fascinating museum.