In contrast to the war games my birthday parties with Hans, Klaus and Rainer took place in a rather amicable atmosphere. Mother, who liked my friends very much, was very supportive and ensured that we boys would have fun in celebrating my special day. She even contributed a bottle of fine Mosel wine. Since each guest also brought a bottle, Mother hid them and mad sure that only one bottle at a time would be on the living room table. She did this to alleviate my aunt’s concern over our overindulgence in alcoholic beverages. Before the actual party began, Mother and Aunt Mieze joined us for coffee and cake. All eyes were fixed on the main object of attraction, a visual feast, which made our mouth water in delightful anticipation. Mother had known my preference for the same cake during the past four years and had done it again for my 20th birthday. In the middle of the table she had placed the beloved Grillagetorte, which she had ordered from the local bakery and pastry shop. As soon as you mention this cake outside the Lower Rhineland, you encounter blank faces, because nobody seems to have heard of it. But for decades the Grillagetorte had been the center of many traditional coffee parties and the focus of family get-together and festive days. The cake is the product of high-level pastry making, a pastry composition made from half-frozen cream and meringue. This was heavenly cake for us. It had a fresh and crisp taste, crunchy and rich with its layers of cream and pastry, in short it was fit for the celebration of the first twenty years of my life. How much we enjoyed the feast can only be measured by what little was left over on our plates, which looked as if we had licked them clean. Mother and Aunt Mieze now withdrew to the kitchen so that the all-boys party could begin. We opened the first bottle of wine, filled our glasses to the rim and said cheers. 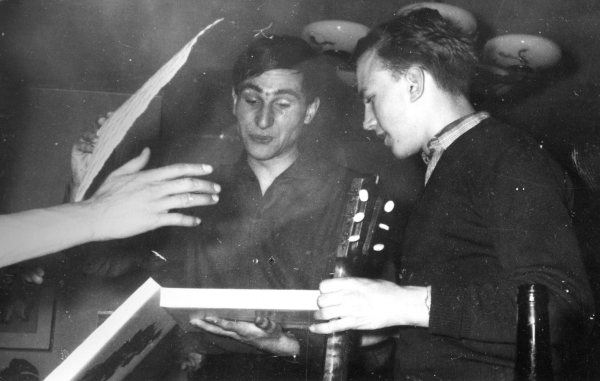 It was the tacit understanding that each guest would have to make a presentation worthy of the occasion. Rainer took on the role of a nonagenarian and delivered a comical review of his long life in a slapstick mix of prose and poetry, which, because I remember it so well, I will attempt to translate into English. 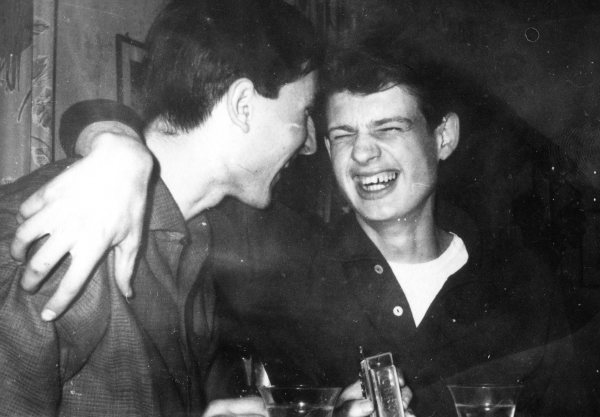 “Today I am celebrating my 90th birthday. I don’t feel that old yet, but I always say, what is gone, is gone. When I was born, there was nobody at home. On the table lay a note that said, ‘The milk is in the oven’. My mother’s maiden name was Federal Railway, for that name was written on our towels. We did not have a clock. When the chamber pot was full it was six o’clock in the morning. But when my father had gone boozing, the pot was running three hours fast. When I was six years old, I went to a special needs school. What my special needs were, I still don’t know to this day. The teacher was quite dumb and asked a lot of questions. One day he asked one student, ‘What do you know about the ancient Romans?’ The student answered correctly, ‘They are all dead.’ Then it was my turn, ‘What do you know about the ancient Wends (a Germanic tribe that sounds like walls in German)?’ I answered, ‘The plaster keeps falling off from them.’ He must have liked my answer, for he pressed his hand into my face. After I had completed my education, I started to work in a photo shop. There I could not develop, because my boss was constantly fixing me. One day a woman came into the shop and asked me to enlarge her family. I told her to kindly go to the man who had started it all. Each time I opened the cash register I got a cramp in my fingers. My boss did not like it and I was voluntarily forced to leave. Then I went on a long journey with my older brother. All the things he found, other people hadn’t even lost yet. One day we found a rope with a cow attached to it. The judge would not believe that we just wanted the rope and he gave us three years of free board and room. During that time I discovered my poetic talents and wrote a number of fine poems, one of which I would like to share with you now.

‘A skunk sat on a bench and stank.

Away it wouldn’t scurry.

It wasn’t in a big hurry.

And when the sun had finally sunk

The skunk on the bench still had stunk.’

The translation provides a little bit the flavor of the story, which was very well received by the entire gang and cheered with another glass of wine from a new bottle of slightly inferior quality. Hans for his contribution played three pieces of classical guitar music composed by Sor, Carulli, and Albinoni. This was truly a feast for our ears, even for Rainer not accustomed to this musical genre. Hans, an absolute genius in so many fields of endeavor and autodidact in the fine art of playing the guitar, performed later in his university years on his simple six-string so expertly that a wealthy aficionado gave him as a gift the best classical guitar money could buy. What amazed then and still amazes me today is how a single instrument can sound as if there were three: one for the melody, another for the accompaniment, and a third for the rhythm provided by the tapping of the free remaining fingers on the hollow body of the guitar. 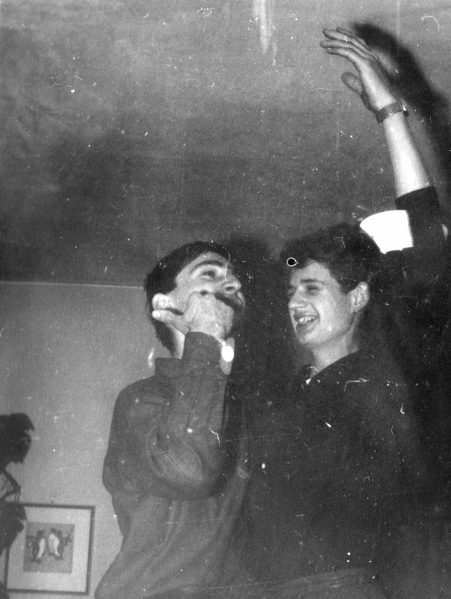 Rainer and Peter Singing a Duette of our Opera

Mother brought another bottle with a happy smile as if she was reminiscing about the good, old days in Gutfelde, where liquor also flowed in abundance to serve as a social lubricant. Then Klaus, apparently ill prepared, suggested that we all produced a totally improvised opera with the lofty theme of an emperor going to the bathroom. By this time we had imbibed so much wine that we most enthusiastically accepted the challenge to do a mini-opera without an orchestra guiding us from scene to scene except for Hans’ intermittent strumming on the guitar. We sang solos, duets, every possible combination of roles and characters describing graphically in a down-to-earth language the emperor’s pains and troubles on the toilet seat. As it was also loaded with words that would never surface in a properly written school essay, I will spare the reader any further details of our otherwise artfully created opera.

After we had emptied the third bottle and our cheerfulness had turned into a cacophony of uninhibited song, fragments of classical music, and pop music from the radio, we transferred our party to my room at the opposite end of the apartment as not to disturb the elderly tenants below. With wine being consumed more in gulps than in sips, the level of our inebriation had reached its climax. We played a round of strip poker, in which for each lost game the player had to surrender one piece of clothing on his upper body and be marked with a black cross from a chunk of charcoal. Finally it was time for my friends to go home. I guided them down the two flights of the creaky wooden staircase making sure that nobody would fall over their wobbly legs and also would not make a racket that would incur the wrath of the landlady. She had once asked me rather innocently how I liked the new apartment. Not expecting any guile, I naively replied, “Oh, I love the new place very much.” Then in a threatening tone she retorted, “Then make sure that you will keep it!”