Note: This article was entirely written in German. You will find it in the P. and G. Klopp Story under the heading Stories in German. There you can read about the difficulties of finding the right scope and basis for any genealogical endeavor. Norbert also writes about the potential legal pitfalls that may dampen your enthusiasm for family research. I translated that paragraph and posted it below.

“I want to throw some light on another aspect. In spite of all the fully justified interest in the documentation of family history and in the fortunes or misfortunes of the people’s background one must cautiously and discreetly deal with such information and carefully deliberate as to what is suitable for the ‘general public’ and as to what one should keep to oneself. A close relative, who had dealt with the matter much more thoroughly, had to endure some bitter experiences. To gather information he had written to all family members, who were still alive, a questionnaire and the request for pictures and information. Furthermore he published the pertinent data on the worldwide web. There Mrs. X read that her father had died of disease Y. As far as she was concerned, he had gone too far and threatened to sue, unless he immediately took it off the Internet. 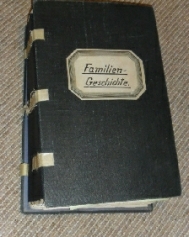