Dear reader, if you wish to refresh your memory on my uncle Friedrich Klopp (1875 – 1946), the oldest child of Peter and Emma Klopp, go to the Klopp Family page and click on the Klopp tree. There you will find all the previous posts on Friedrich in chronological order.

Shortly before Auguste Louise Klopp’s early death the family of the mason Friedrich Klopp moved to Hemstedt, about 6 km south of Algenstedt. The commotion and upheaval  surrounding the relocation to yet another residence were taxing Auguste’s energies to the very limits of what she could bear. She suddenly and unexpectedly passed away in Hemstedt on August 9, 1924. This came as a severe blow for the family, especially for her husband who had so far depended on her income. 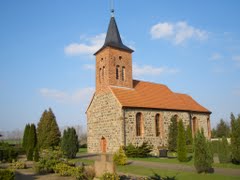 At the local cemetery you can see still today (1990) the lebensbaum trees, which her then 16-year old son Hermann had planted at her grave site. At the most recent residence widower Friedrich Klopp continued to live for a while with his two youngest children Liesbeth (born 1907) and Hermann (born 1908).

On December 22, 1927 Friedrich married the well-to-do widow Auguste Berlin (née Müller) in Gardelegen. The marriage remained childless. Occupationally and privately, things from this point on were looking up. In 1928 the couple acquired in Gardelegen the house at Alte Heerstraße 14 (now Street of the Victims of Fascism). The recently remodeled and pleasant house is still standing today.

In the masonry line of business Friedrich Klopp quickly gained recognition for his workmanship and advanced to become an experienced construction project manager. In the 1930’s he maintained a financially sound and profitable enterprise. He built several residential houses not to mention a bakery complete with a sales outlet, which turned out to be the largest commercial bakery in town.

The loosening of the ties with the antisemitic Zielitz family of his late wife was like an inner liberation for Friedrich. But being at heart friendly and good-natured, he did not completely sever his contacts. Due to age and declining health he gave up his business in 1937. His son Hermann did not have what it takes to run his father’s construction enterprise.