On the Home Stretch

I have no recollection of Kenora, where we spent the fourth night. In those days it was just a small town on the main highway between Thunder Bay and Winnipeg. In the fifty years since then it has seen a major transformation from a backward lumber town to a modern city with a sharp focus on tourism and support for recreational ventures at the Lake of the Woods with its 105,000 km of shoreline making it the longest coastline of any Canadian lake. Its name did not hint in the least at the wonders it had to offer to the outdoor enthusiasts. There was an incredible number of over 14,000 islands on this sixth largest lake after the Great Lakes. Surely there had to be a separate island for each canoeist and camper to land on here.

As we crossed the provincial border into Manitoba the next morning, the lakes became rare, the forest denser, the land increasingly more level, and the highway had fewer curves. Adolf and I began to get bored. We were both eager to get to Calgary as quickly as possible. When we left the trees behind and entered the open prairie, which was only now beginning to show some signs of spring, Adolf stepped on the gas to cover as many miles as the speed limit would allow. The gray monotony of the fields still waiting to be planted with wheat and the unfiltered harsh sunlight made our eyes burn. I was feeling tired, although I was only sitting on the comfortable car bench. I began to view the second last lap of our trip more as a burden than a pleasure. Adolf, my good brother in times, when my spirit was noticeably drooping, encouraged me, “You should come back here in June, when the wheat fields begin to green or better yet in the fall, when an ocean of golden stalks greets you with waves of ripe wheat stirred up by the wind and is putting on a show that you don’t want to miss.”

He was right. I should not have allowed my enthusiasm for the land to sag so quickly. Looking back at the marvelous sights of the past few days, I felt thankful to Adolf for having taken me on this trip. A few kilometers past Port La Prairie we stopped at a roadside rest area to have a lunch break. I delighted in seeing the first signs of spring in the green grass already growing around our picnic table. Cooking a simple meal like chunky soup from cans was really fun on the little gasoline stove that had been useful so often since my boy-scout years in Wesel. After this short rest in the sunshine we put in six or seven more grueling hours of travel time and eventually dropped in at a small modest motel in Swift Current, Saskatchewan. It was going to be our last night on our way to Calgary. Thanks to Adolf’s tireless driving often at speeds going over the posted speed limits we arrived at Gerry’s house on Fyffe Road two days earlier than we had planned. 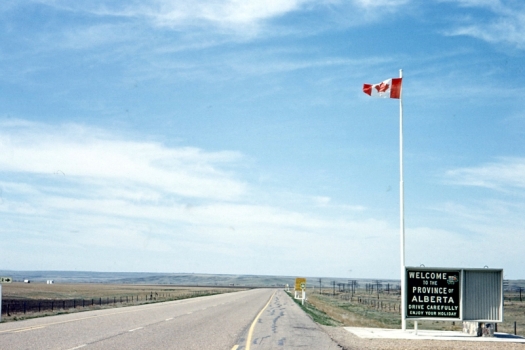 And the Price of Economic Growth

The next morning we had to put up with an annoying delay. Adolf, having noticed disturbing vibrations from the front wheels, decided to have them balanced. Unfortunately, the mechanic of the small town service center took his time showing up for work on this Sunday morning. He gave us the distinct impression that he would rather go fishing than manning the lonely service station and doing repairs on a car that should have been fixed on a weekday. On second thought, we were lucky that we did not have to wait till Monday.

To make up for lost time Adolf especially on the long straight stretches exceeded the speed limit often clocking 130 km/h on the speedometer. I was not too unhappy about it, since the landscape, as we were approaching Sudbury, looked more and more like a moonscape, barren and desolate. The city named after a town in England had once been a major lumber center, but now was a booming mining community, where high concentration of nickel ore was being mined. Looking at the treeless industrial wasteland, where big processing plants with their tall chimneys belching out a mix of steam and smoke, I had a first real inkling of what man’s emphasis on economic growth could do to nature. I was not interested at all how many thousands of tons of ore were being processed in the Nickel Capital of Canada. One could even read these facts on picture postcards and travel brochures.

Adolf stopped for lunch at a downtown restaurant where the food was good and the prices were reasonable. While we were eating a juicy hamburger, I softened a little my critical stance on the devastating effects of industrial exploitation. I realized that people in order to live needed work. I also found out later that much larger regions, some greater in size than the two Germanys put together, remained untouched and unspoiled wilderness. I could see that Adolf was right after we left the dust and grime of the city, where a quarter of all its workers were employed by the giant nickel company Inco. Once we had traveled past Sault St. Marie, a steel manufacturing town just across from the State of Michigan, I was in for a visual treat. All of a sudden we were back in the forest driving past idyllic lakes and streams, then through the Lake Superior Provincial Park. All I remember is a blur of images and impressions of one the greatest freshwater sources in the world. Whenever we drove close to the shoreline of Lake Superior, fantastic scenery would present itself to our eager eyes. When I glimpsed a chain of islands large and small within an easy reach by canoe, many of them treed, I enthusiastically exclaimed, “Adolf, as soon as I have earned enough money, I am going to buy one these lovely islets for Biene and me.”

Adolf put on a sardonic grin and replied, “To earn money, you need a job, perhaps in a place like Sudbury.”

We stopped at one of the recreational areas with its robust wooden picnic tables near the edge of the water. It seemed like we had the entire park to ourselves, as it was still early spring for tourists to venture out to this remote natural paradise. In the cool of the approaching evening fog patches settled over both land and water creating a magical effect. The islands with their spruce tops sticking out in dark silhouettes against the orange evening sky appeared to be drifting ghost-like across the tranquil lake. Then we drove on to the small community of Wawa, the gateway to the hunting and fishing grounds of Northwestern Ontario. On this night we slept in a hotel for a change, having spent altogether $23.00 for gas, repairs, food and lodging.

My dream is for people around the world to look up and to see Canada like a little jewel sitting at the top of the continent.

It was almost noon when after hours of waiting we finally got our turn to go through Canada customs. The officials were friendly and efficient. The long delay was due primarily to the large number of passengers whose innumerable suitcases, boxes and crates that needed to be checked. Afterwards we locked away our stuff in rental lockers and took a taxi to the City of Montreal. Our sister had already said good-bye to us, as she was going to board the next available train to Calgary. So Adolf and I were on our own in search of a car dealer. My brother needed a vehicle that would carry us across the North American continent.

Near the city center we got off the taxi and decided to make use of the much cheaper transit system or cheaper and healthier yet to just walk. Now I had a chance to take a few photos of the new office buildings that were popping up everywhere like mushrooms after a heavy rain. I found that the Elisabeth Hotel towering over a much smaller church building was especially interesting, as the structures symbolized the transformation of Quebec from a church dominated province to a secular society. I was getting a little worried, while Adolf dragged me from one car dealer to another. He had not yet found, what he had in mind and was already talking about taking the train as well.

As we were roaming through the streets of a residential area searching for another car dealership, I noticed the peculiar construction of most of the houses. In order to gain more living space, they had no interior staircases but had metal stairs leading up to the entrance doors at the second and even third floor. I was thinking of the densely populated cities back in Germany, where floor space for renters was at a premium. How much more apartment space could be generated with this typical French-Canadian building concept.

Finally Adolf had found a good, used 8-cylinder Pontiac at an equally good price of $2,500. The manager, apparently very pleased with my courageous attempt to communicate in French with him, made an arrangement with Adolf that quickly consolidated the sale. It happened exactly the way my brother had once explained to me on our summer wine tour to Trier. He paid the full amount in cash. In return M. Gagé allowed him to travel with the dealer’s license plates to Alberta to save him the high provincial sales tax. Those were the days when business transactions were concluded with a handshake based on mutual trust. M. Gagé expected Adolf to mail back the plates to Montreal.

I had never sat in the such comfort of a huge and powerful American car before. It was even equipped with automatic transmission quite rare in Germany during the mid 60’s. I really enjoyed the ride back to the storage facilities, where we picked up our suitcases and wooden crates with all our belongings. It was already getting late in the afternoon, when our cross-country Canada trip began.