Taking care of a pet is not the same as looking after a car, a yard or a household. The main difference is that people have an opportunity to interact with a living organism. So it was with me and the fish in the aquarium. To make them thrive, I had to feed them, replace the water every month or so, scrape off algae that grew on the walls and make sure the sand at the bottom was free of gunky waste material. I committed myself to do this chore, because I liked the little acrobat. By responding and interacting with me, it had won my heart. 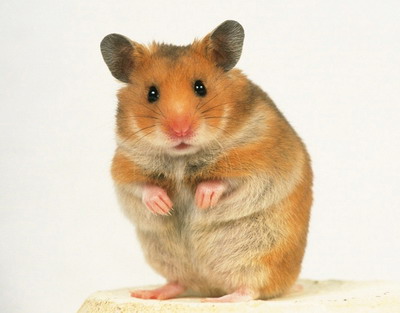 It was not too long before I could afford to buy a different kind of pet, a sweet little golden hamster in a large cage. The pet store sold only females to prevent customers from breeding and competing with their line of business. The average life expectancy is between two and three years, so customers sooner or later would have to come back and buy a replacement. My hamster was a cute, lively and healthy creature making me quickly forget my tiny pike. My friends were delighted as well taking turns holding her and letting her tickle them with her whiskers.

During the twilight hours she became most active. Often she would climb into the exercise wheel and turn it at an incredible speed for more than half an hour at a time. During the day she would snuggle up in her cozy nest made out of wood shavings. One day I brought her a male companion from a pet vendor at the Wesel kermesse. After a friendly greeting ceremony and a get-acquainted ritual of touching and sniffing, they discovered that they were of opposite sex. Without further ado they mated in front of my surprised eyes. They obviously thoroughly enjoyed what they were doing and took their time to prolong their pleasure of communing together. After the two were done celebrating their union, each withdrew to its own nest at opposite corners of their cage.

Now golden hamsters have the shortest gestation period of all mammals, a mere sixteen days to produce a litter. Word spread quickly among my friends and in turn to their acquaintances that I was breeding the cutest pets they had ever held in their palms. Before the pups were even born, they were sold to six prospective buyers at two marks a piece. Great was the disappointment, when the first litter contained only two. I learned first-hand what the economic law of supply and demand really meant. There were four pups in the second litter, and they sold well with a 50% increase in the price. In the following litter there were eight, and when on the fourth cycle sixteen pups were born, my mathematical mind saw the pattern of a geometric progression and predicted thirty-two the next time around. Well, there was no next time. Mother hamster had enough. She figured the best birth control would be to kill her partner on his next amorous approach, with which by now she was completely familiar. And that’s what she did. My poor golden male hamster died shortly afterwards succumbing to the lethal wounds and lacerations from her razor-sharp teeth. The population explosion had come to a sudden end.

In the evenings Mother and Aunt Mieze had often company. My brother Karl and sister Eka (Lavana) now and then came for a visit. I felt quite frustrated that my bedtime was still nine o’clock. I was excluded from the after-supper conversations that would have granted me interesting insights into the world beyond my little town. So during the day equipped with a sharp and wide-blade screwdriver I attempted to drill a hole through the wall to participate at least passively in what was being discussed. Two years later I would have had enough know-how to install a hidden microphone in the living room. But drilling a hole through a concrete wall proved to be too much of a challenge. I had barely penetrated the plaster. No matter how hard I pressed my ear against the hole in the wall, I could not pick up a single word. But for now, I had to wait for a bedtime extension a few years down the road.

When Aunt Gertrud, who had been head nurse in an East German hospital, managed to escape the communist state and slip across the German-German border, she found immediate employment in the Wesel Senior Citizen Home. She often dropped in at our apartment and bitterly complained about the chaotic conditions at the home for the elderly and grieved about the lack of respect for her as a person and leader. The staff envied her position that in their opinion should have been filled by a local administrator and not by a ‘foreigner’ from the German Democratic Republic. All alone against the backdrop of daily insubordination and insidious backstabbing, she became quickly depressed and despondent. Cases of severe depression were well-known among the members of the Kegler branch of our family. Less than a year after she had entered the ‘Golden West’ with high hopes to find freedom and prosperity she couldn’t take it any more and committed suicide. Not being particularly close to my aunt with the bushy eyebrows and not quite realizing that death meant final separation from our earthly existence, I went about my daily life as if nothing had happened (See also post on Gertrud Kegler of May 5).