On my Moped to Father in Michelbach

It doesn’t matter who my father was; it matters who I remember he was. 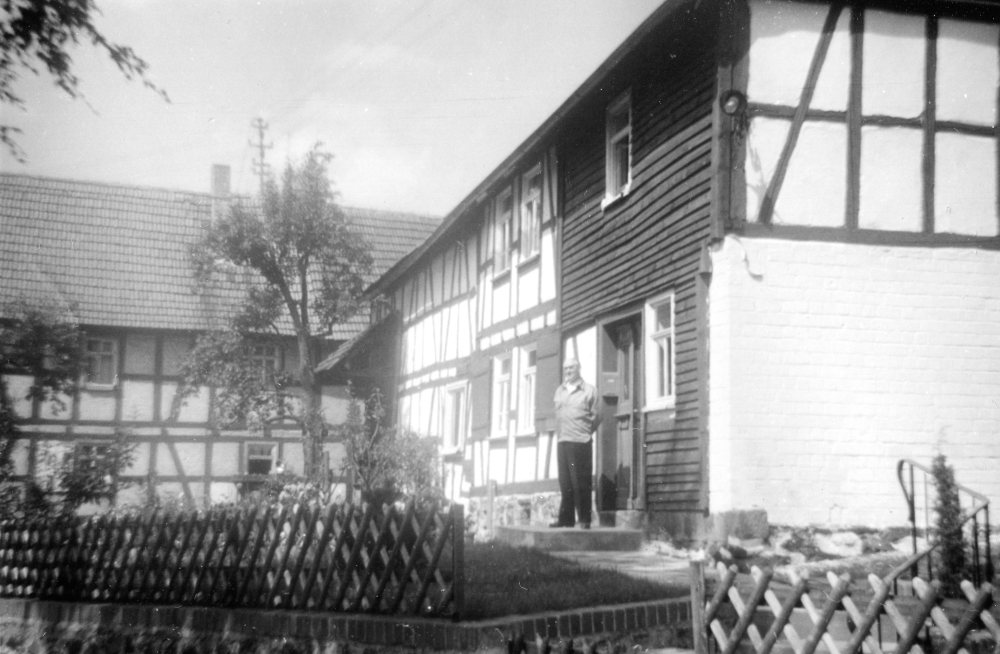 It had been more than five years, since I had seen Father. He had left one day looking for work at friends and relatives. Considering his poor health and age, he was faced with the dilemma of having to return to Wesel, where he would be dependent on Aunt Mieze’s financial support or else be content with the odd casual work, which barely supported his livelihood. Furthermore considering his intensive pride as a former successful agricultural administrator and the pain he must have suffered from the dismal failure of his farming venture in Southern Germany, I can understand his anguish and feelings of having become utterly worthless in his own eyes and in the eyes of his family. Pride and failure have never been good bedfellows in a man’s heart, and Father was no exception. As for me, I missed his presence a lot, but I was too timid to ask as to when he would come back and did not know what was going on behind the scenes. Much later I found out that with Uncle Günther’s support Mother had initiated divorce proceedings. On the basis of the law that required common residence and conjugal relations Mother was able to get a divorce in exchange for waiving any rights to financial support from Father. So to make this sad and depressing story short, Father after the divorce joined and not long afterwards married Erna Krämer, an old acquaintance from the Warthegau days, who lived in her rustic and cozy home in the village of Michelbach at the foot of Mount Vogelsberg north of Frankfurt.

The last summer holidays before graduation were only a few weeks away. It was also to be the last year Mother and Aunt Mieze would reside in Wesel. Uncle Günther and Aunt Lucie had invited them to live with them in Watzenborn-Steinberg (now Pohlheim), where all four would share the rent of a brand-new house that had been built by a teacher as a retirement home in the distant future. Naturally there was a lot of joyful excitement among the three Kegler siblings having been raised together at the parsonage in Grünewald and now having the chance of living once more under one roof. There was just one problem. How would I fit into the grand plan of bringing the family members together? A transfer to a high school in another province with different graduation requirements was out of the question. The solution was an obvious one. I had to stay behind and continue my studies later on in the fall, while they would move to the land of the Hessians. The decision to finish my secondary education in Wesel proved to become one of the great milestones and turning points of my life.

But for now at the beginning of the six-week break from school I had other things on my mind. I had to think of visiting Father. One of my old scout buddies sold me his moped for DM 50.00, a true bargain at the equivalent of ten monthly allowances. It had a peppy engine and in spite of being quite old was in excellent shape. The best part was that I did not need a driver’s license. Having always envied Klaus for his scooter, I now had my very own motorized transportation with which I could travel to Michelbach to see Father and his new wife Erna.

Philosophical Discussions with my Father

At a maximum speed of 50 km/h it took me all day to reach the scenic hill country around Mount Vogelsberg. Father and Erna gave me a warm welcome alleviating immediately all fear that Father might have turned into a stranger. I had departed from Wesel with these somber feelings, which had been building up due in part to our long separation, but also due to Mother’s bitter and regretful remarks that she had sometimes made about the divorce. So it was a great relief to be greeted so cordially and be welcomed as son and friend into their cozy old farmhouse. Here then I was going to spend the next six weeks, would become reacquainted with a rural environment slightly reminiscent of Rohrdorf, would get to know Father more closely through our philosophical and historical discussions, would begin to like his wife, would be introduced to her friends and relatives in the village, would taste her hearty meals albeit a little too rich in fat, in short I was here to relax and feel completely at home in an atmosphere of genuine friendliness and camaraderie.