A Metaphor for Emotional Turmoil

There was enough explosive emotional energy bottled up inside me. Having no one to write to, I had to return to the unfinished novella to release it. At the park bench near the German Corner in Koblenz I had most of its content on Carthage written up in my notebook. The personal experiences making the story come alive were missing though. Now they were burning with a searing fire in my heart. My fingers were itching to commit them to paper.

Our driving lessons had unexpectedly ended. We were told that the instructor was needed elsewhere and we would start over together with the next batch of soldiers coming in to render the course more efficient. Gauke and I were delegated to work  in the office. The assignment was to catalog the total electronic equipment with all its individual parts down to the last nut and bolt. Thus, we created a giant database for the signal corps stationed at Maxhof. I dictated the names and parts numbers and Gauke typed. One can hardly imagine anything more boring than this. But there was one advantage. We only worked during regular office hours, and we were done with our daily chores of number crunching by 4:30 p.m.

Peter playing with the neighbor’s dog (1963)

So I had more time than ever before to write in the semi-private room of our Maxhof residence. The historical sections of the novella heavily leaned on Mommsen’s historical work ‘History of Rome’ and to the best of my knowledge they described the power politics and Machiavellian schemes of Rome very accurately. My heart, which had lost two girlfriends within the span of less than six months, was the fertile breeding ground for the stuff that good writing feeds on. I transformed my former pen pal Margret, into Bersika, the daughter of a wealthy member of the Peace Party of Carthage to make the final dramatic encounter in the burning capital of the Carthaginians more believable. On the other hand, Claudia (Biene) and her twin brother received a more realistic description reflecting our first encounter at Lake Baldeney and the ensuing correspondence, which had ended so painfully. On the Palatine Hill in Rome Publius (Peter) and his friend became acquainted with an old sage, who introduced the young men to the philosophical center piece of the novel, which reflected my ideas, in part burrowed from Democritus, on God and His creation and how He lives within it in a mysterious interplay between mind and matter. The destruction of Carthage, the fierce house to house street fighting, the slaughter of tens of thousands of civilians, the senseless resistance of the dictatorial ruling party against the almighty Roman war machine, the burning houses, the stench of unburied corpses provided the background for the final scene symbolizing my chaotic troublesome state of mind. 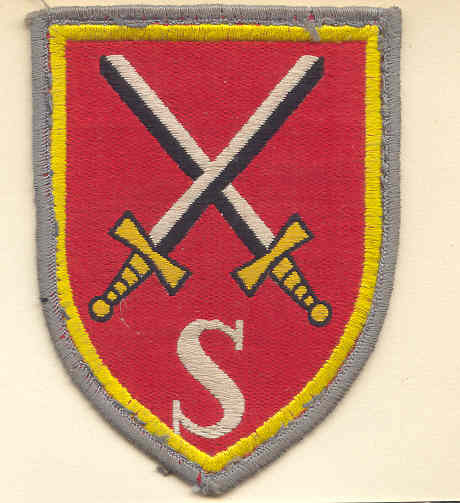 Crest of the Signal Corps

When I had penned the last line, I felt an eerie calm come over me. For a while I sat at my desk without a thought, without a feeling; it seemed that my inner being had been poured out into the thick writing book before me. Private Gauke entered the room. He had been teasing me about my writing craze for the past couple of weeks and had noticed with genuine concern how I was withdrawing more and more into my crusty shell. He said, “Peter, it is about time that you get off your chair. I just discovered a cozy pub in Feldafing. Let’s go and have a drink of that great Bavarian beer.” Gauke was a fine fellow. I gladly came along. The novella was finished.