Light at the End of the Tunnel

Late Sunday night Private Gauke entered our room after spending the long weekend at his girlfriend’s home. He was so excited about it that he felt justified in waking me up. Even though I was still half asleep I could tell that my friend was beaming with joy. He had good news to tell me. He had met his girlfriend’s parents who were delighted to get acquainted with the young man their daughter had been telling them about so much. He was amazed almost embarrassed how much they knew about him. For them the most important thing was to see their daughter happy. In their eyes he seemed to be the right man for her. My companion would have gone on to share his happiness with me, but when he looked at my sleepy and grumpy face, he stopped. I was annoyed and wondered why he could not have waited with all that chatter till next morning. Then I would have perhaps appreciated his latest romantic tale with a wakeful mind. I made no effort to suppress a loud yawn to indicate that I wished to get back to sleep. However, Gauke had still something else on his mind that was supposed to cheer me up.

Biene quite in Tune with the Fashion of the Sixties

“Peter,” he started again with undiminished exuberance in his voice,   ”my sweetheart back home has a wonderful girlfriend who is just like you; she loves poetry, even writes her own verses …”

“Peter, don’t get me wrong. You need to break out of your doom and gloom. I invite you to come with and spend the weekend at my parents’. We could go out together and meet …”, I interrupted him again raising my voice just a notch higher to make it clear that I had had enough of his idle talk.

“Well, suit yourself”, he replied. All I wanted is to advise you to keep your options open. It is not a good idea to have just one egg in your basket. In case it breaks, you know.”

Poor Gauke, he tried so hard. He was a nice chap and a good friend. He was truly trying to help. I was stubborn or insanely in love, or both. It took me a long time that night before I managed to catch a few winks of sleep. 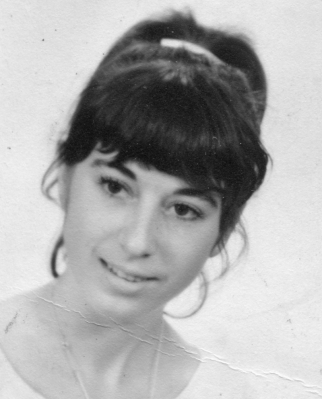 In the second week of February, just when I had given up ever receiving a message from Biene again, her letter arrived, which I expected to be the final farewell letter. Instead it contained a bombshell. I read with relative calm that her engagement with Henk had been broken off. Her dream about a life together with him had been shattered through unfortunate events and circumstances, which she was unable to describe except to say that Henk had loved her so much that she for a while believed to love him too. However, what led up to the actual break-up, she left unsaid setting in motion an avalanche of speculations on my part. In vain I tried to penetrate the veil that shrouded the circumstances that she was alluding to. Had Henk revealed an aspect of his character that made her shudder? Had he been too aggressive and demanded of her too much, too soon? Many more questions were racing through my head, for which I found no answer, creating a jumble of mixed emotions. If she had given me a few concrete details no matter how shocking, I would eventually have accepted with love and understanding her tragic experiences. As I continued reading I noticed how much she was troubled by my plans to emigrate to Canada.

“How can we possibly meet again, when you are so far away,” she asked, “and disappoint each other? Do you really believe ‘disappoint’? I cannot imagine it; but I would not be afraid to see you again.” At that moment my heart beat a little faster. The horizon began to brighten up with the rays of hope and eager anticipation. Unfortunately, like a bolt out of the blue, without any merciful transition, Biene continued, “Imagine this, my pen pal from Morocco intends to come this summer to get to know me and Germany. Will he be like I imagined him to be? My parents don’t agree with the idea; for they fear we could fall in love with each other.” I felt that the tenuous thread that so far had held us somehow together was ready to snap. What prevented this from happening was a mental trick that moved my mind to a distant vantage point from which I looked down upon the bizarre soap-opera-like comedy show below. The Moroccan pen pal had miraculously risen from the dead and imbued with renewed zest for life was eager to see her, to meet her, to get to know her, while her poor parents having just been saved from one disaster were heading into the next. I could not help but internally smile and laugh. My friend Gauke would be laughing too, He was absolutely right in his urgent plea to let go of her and also in his opinion to have more options than one. In an ironic twist it was Biene, who obviously had more than one egg in her basket. One broke, but she had two or more eggs left to break. I tried to probe into the possible reasons as to why in this particular moment she would tell me this. Was she trying to goad me into action? Her concluding sentence seemed to confirm my speculation, “Sometimes, even though you wouldn’t like it, I would really like to see you again.” A new seed had been planted. It was now up to me to water it, to nourish it, to make it grow in the fertile soil of reality. To accomplish it, a rendezvous with Biene was the key and time was of the essence. To blaze a trail to the doorsteps of her heart, I made some unusual preparations.