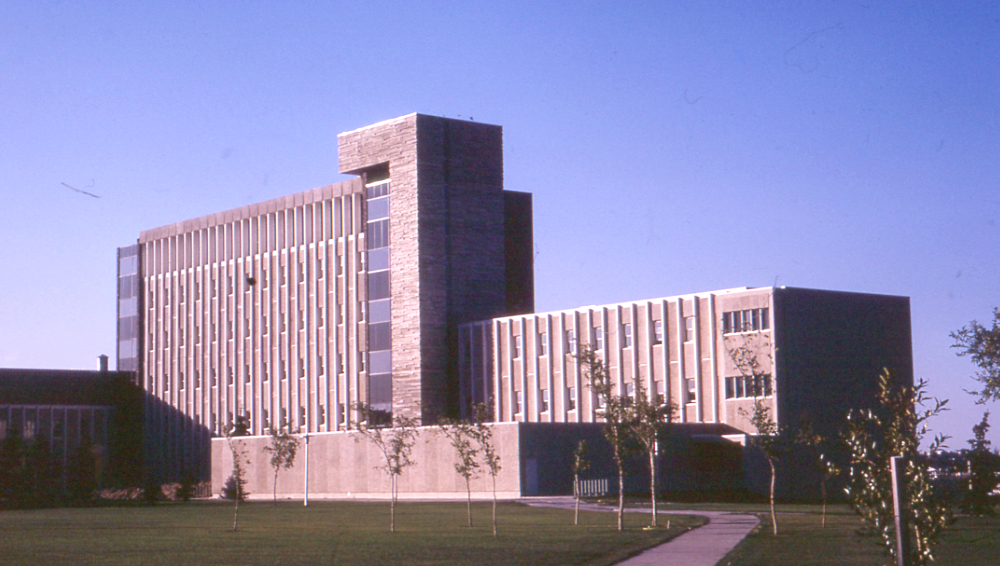 Another historic photo of the University of Calgary in the mid 1960’s!

At the end of the frosh week, during which we new students received our orientation and introduction into the life on campus, the university had organized a dance in the huge gymnasium of the Physical Education complex. Six bands were playing alternately rock and more traditional music. They made sure that there was never a break for the indefatigable couples on the dance floor. Having no friends to hang out with, I felt lonely and wished that Biene were there sharing this special moment with me. With all the tables taken I had no place to sit down. I leaned against the back wall taking in some of my favourite music I remembered so well from my birthday parties. But I was not in the mood to enjoy it. So I left, took the next available bus and returned to my humble basement room. To overcome my feeling of loneliness I wrote a letter to Biene.

My dear Biene, now you will get to know how things turned out with my search for an apartment and with my introduction to the university. For days I have been running around in the northwestern section of Calgary, until I finally decided on a small basement suite. I am exaggerating if I say suite, because it is only one large room. Table and chairs, bed and cupboard, as well as a gas heater and some basic cooking facilities are included in the rent, which is thirty dollars a month. To be totally independent, I decided to exclude bedding from the rental agreement, which would have cost me five dollars more. Now it is gradually turning into a really cozy place All day long I scrubbed the dirty walls, mopped the linoleum floor and cleaned the windows. My old wooden crate has been converted into a cooking stand so that the table remains free for my studies. Oh and then came all the shopping I had to do: bedclothes, blankets, cutlery, bowls and plates, a small radio, etc. Now I am satisfied and wonder whether you would like it.

An old lady also lives down here in the basement adjacent to my room. She is very pleasant and enjoys the sound of my guitar, which I sometimes play for relaxation. I could hardly suppress my astonishment about her ignorance of geography. When I told her that I had come from Germany, she asked me, where that city was located in Canada.

Yesterday we had our orientation complete with welcome speeches and formal ceremonies for the frosh. The professors spoke so clearly and distinctly that all my fear disappeared from my anxious heart. I have already made the acquaintance with a couple of classmates and hope to meet them again later on. To understand them is quite a bit harder for me, because they just don’t make the effort to speak clearly and distinctly.

Yes, dear Biene, if you were here, my happiness would be complete. How much I miss you, I again felt last night, when after the formalities the six largest bands of the city were playing music in the gymnasium, where everyone was dancing except you and me …

The very next day the fall session began. Since I was in a first year program, most of the lectures were held in auditorium-sized rooms accommodating more than a hundred students at a time. Courses like calculus and psychology that were being shared by other departments were especially crowded. Having chosen a senior course in German turned out to be a blessing. Dr. Cardinal, a very likeable professor, was teaching The Age of Goethe to our small group of three students. Here my mind could at least take a short break from the great demands in the other subject areas. Ever since Biene and I had decided on starting our life together as husband and wife in Canada, I knew that I had not merely entered a race for the survival in the academic training program, but also committed myself to an all-out effort to achieve an above average standing. For only with a grade point average of close to an A could I hope to receive substantial government grants and scholarships for the second year. I had poured my entire savings from my army service and my summer earnings as a labourer into the cost of tuition, textbooks, rent and living expenses. There would be little left for me to finance another academic year except with the help of financial support from the Alberta Government. Thus, in spite of my limited English language skills I set my goal to nothing less that a B+ over all standing. To achieve this, I had to get near perfect scores in German and Calculus, while maintaining a minimum of 70% final grade in the other subjects. For the first couple of weeks this appeared to be an unobtainable target. I often communicated my concerns and worries with Biene. I told her that I did not want our life to start in poverty with no chance for a prosperous future. Even just to finish the year with merely passing grades looked like a great challenge to me in the beginning. Then came another shock. I had set my hopes on studying lecture notes and textbooks and on doing well in the multiple-choice tests that were becoming very popular in the mid sixties. Instead we were required to write one essay after another. I felt that I could not compete very well in this challenging field  with my Canadian fellow students. A visit to the office of my English professor was going to shed some light onto the nebulous trail of my academic future at the U of C.