To my dear blogging friends: Please note there will be only two posts next week. The one on Tuesday will continue with Anke Schubert’s submission in German: Eine ergreifende Liebesgeschichte, and the one on Thursday will be the next episode of the P.and G. Klopp Story. Canada is celebrating Victoria Day with one extra holiday for the month of May.

Discussion with a Friend on the Nature of Love

Mother had just returned from a visit to Gerry, daughter-in-law Martha and her one-year old grandson Wayne in Medicine Hat, Alberta. It so happened that I was on a ten-days leave and spent a relaxing vacation with her and Aunt Mieze, Aunt Lucie and Uncle Günther at their wonderful house in Watzenborn-Steinberg (Pohlheim). Mother talked a lot about her exciting trip to Canada. The proud grandmother had traveled with Gerry’s family over the Rocky Mountains all the way to beautiful British Columbia. Gerry described the countryside with its lush valleys, wild rushing streams, spectacular scenery and mild climate as God’s country. True to a long family tradition in the Kegler branch of the family, Mother wrote a report of her experiences of her journey to the land of the beavers. 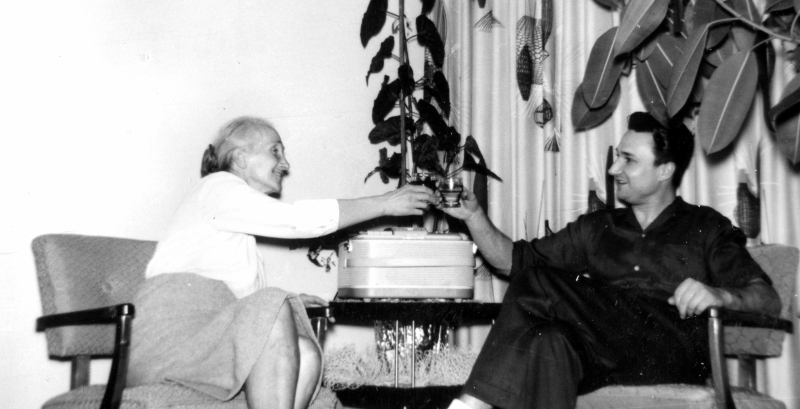 Mother Erika Klopp with Gerry on her visit to Canada

Biene’s school holidays were approaching. In 1962 her family had spent their vacation on the Mediterranean island of Corsica. Now they were planning to spend a couple of weeks at Lake Ammer in Bavaria. Even though I felt my love for Biene was getting stronger with every passing week, I did not openly declare it to her, because I erroneously assumed that she would already know. When she once asked me if I had ever been in love, I missed the golden opportunity to reveal what was on my heart. Instead I used a ride on my brand-new bicycle as a metaphor to describe in the most abstruse way the chaotic state of my inner being. I described how I got lost in the woods. I did not know which way to choose to get out. I dug deep into my psyche, too deep for comfort. Not yet realizing that the good and the evil lie close together within each and every human being, I criticized the world for failing to give me directions. Blind as a bat to my own flaws and weaknesses, I declared the entire world with its political systems, the church, and the army rotten and corrupt. These pathetic meanderings of my mind did very little to express my true feelings for her and would have been better left unsaid. 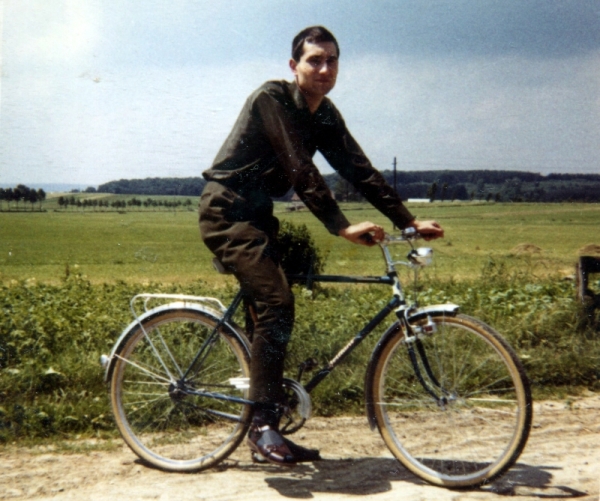 Peter on his brand new bicycle

For the remaining three or four days I went on a bicycle tour with Dieter, my new army buddy. We traveled first up the River Moselle, then climbed up into the Eifel Mountains and stopped at a beautiful campsite named Pomerania, which reminded me of my grandparents’ lost home province in the east. At nightfall we sat in front of our tent looking at the rising moon in a cloudless sky. The day before I had bought a bottle of Moselle wine, a Riesling well-known for its distinguished qualities due to the grapes, which incredibly ripen more fully during extended periods of autumnal fog in the river valley. Gazing at the crescent of the rising moon I remarked, “If me girl-friend in Velbert also looked at the moon this very minute, our eyes would be fixed on the same heavenly object and in some esoteric way we would be connected with one another.”

Dieter chortled a few times, before he retorted, “But my friend, don’t be an idiot. That is not the same as being physically present. When I kiss my beloved Heidi, I know real love, love that you cannot even fathom with your strange romantic ideas in your head.” And that was the beginning of a long discussion on the nature of love. When we had savored the last drop of the wine and were ready to crawl into the tent, we had moved away from our opposite points of view and found some middle ground. We agreed that in order for a relationship to be meaningful both the physical and spiritual dimensions would have to be present. We learned something important from each other. As for me, I resolved to arrange a rendezvous with Biene at the first opportunity that would offer itself in the near future. But you never know to start with, how things turn out in the end.