Chart I – II of the Klopp Family Tree

A few days after the sightseeing tour with Peter I went to see Aunt Alma in Berlin-Köpenick. In contrast to Aunt Meta’s tranquil life in Freiburg, the apartment in Köpenik was a beehive of activity of more than ten family members bustling about. The spacious living room could hardly accommodate the large family. On the one hand I felt like a guest of honor, being the youngest son of Alma’s youngest brother (my father). But I also had the impression that they all had come together to gawk at this rare specimen from West Germany. At age 77 Aunt Alma was still strong in spirit and body to run the household of her daughter Else and son-in-law Artur Thiess and their four daughters. Two were already married with children at the time of my visit.

Uncle Artur was actually my cousin. But I called him uncle, because he was almost forty years older than I. He was engineer. He had published a book on low frequency communication technology and was giving lectures at the Humboldt University as a specialist in the field of electronics. I took an instant liking to him, not because of my hobby akin to his academic work, but rather because of the fact that he was one cut above the rest of those adult family members, who had chauvinistically embraced the communist-socialist ideology. He impressed me with his sharp wit and disarming humor, with which he distanced himself from the political narrow-mindedness of his sons-in-law. Perhaps more importantly, he was for me a father figure radiating kindness and affection. No wonder I maintained contact by corresponding with him until his death in 1992. Apart from the one-sided political talk about the advantages of their peace-loving society versus the corrupt war-mongering system of western capitalism, to which I had nothing to add, confirm or oppose, it was a very enjoyable time spent in a family so wonderfully knit together. One thing of great interest to me was the stereoscopic viewer, in which Uncle Artur had inserted glass plates each containing two b/w images that he had taken with his special 3d camera. The quality of these images was absolutely stunning. For the first time in my life I got a glimpse of the land, where I was born. Artur had taken many pictures on his various visits to Father and Mother’s place at Gutfelde (Zlotniki). When I looked at them, it was like traveling back to a time, when my parents were happy and managed together the three large estates entrusted to them.

In the afternoon Aunt Alma took me to the cottage of her elder sister in the garden district of Berlin-Köpenick. Aunt Jula was born as the second child to Friedrich and Emma Klopp in 1877. She had lived a colorful life spending her teenage and early adult years in Vienna as student and artist. She struck it rich by marrying a wealthy mining director. Later on she became the proud owner and manager of a hotel, but lost it all again during the turbulent inflation years after WWI. In a deal that went bad she took out a mortgage on her property to help out her brother Hermann, a classical rags-to-riches story in reverse. 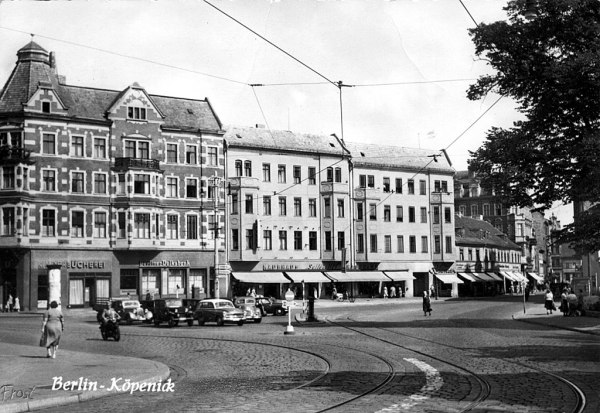 This feisty old lady must have absorbed the whole gamut of communist ideology and firmly believed in it. For she presented her distorted views with so much passion that only unwavering conviction can deliver. In her strident tirades against capitalism she did not spare the West German Chancellor Konrad Adenauer, a Nazi in disguise in her strong opinion, who was planning to wage a revisionist war against her peace-loving republic.

She served stale coffee and moldy cake that someone may have brought to her humble abode a few weeks earlier. Aunt Alma signaled to me not to eat it and drop it quietly under the table. To my great relief she soon announced to her sister that it was time for her to leave and prepare supper for her folks at home. I was a bit disappointed with the visit to Father’s eldest living sister. However, I did not feel personally attacked by my aunt. Being an apolitical teenager, I had already forgotten this unpleasant episode upon my return to West Berlin.