A Most Curious Camping Trip

How I Met Biene

Pentecost was a long weekend and the beginning of a one-week break from school, the last one before the summer holidays. Hans had dropped out of our planned camping trip, because he had to baby-sit his younger stepbrothers and sisters. So Helmut and I got together to discuss our destination and the supplies we needed for the two and a half days. The reasons for the choice of our campsite will forever remain one of the great mysteries of my life. The nearby forests on either side of the River Rhine were within easy reach of a two- or three-hour bike ride. Our favorite camping sites were on federal land, rarely controlled for trespassing by forestry officials, miles away from the noisy highways, perfect places to be in tune with Mother Nature. The choice for this particular location was the opposite of everything I had learned to cherish during the years as a scout. As Helmut and I unfolded the map for the area of North Rhine Westphalia, we glanced over the tent icons, which marked the locations of campsites, and spotted one that bordered directly on a lake. On closer inspection we found out that it was Lake Baldeney between the city of Essen to the north and the city of Velbert to the south. 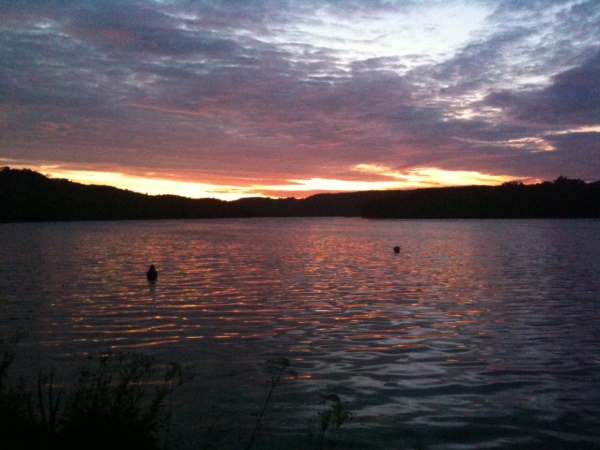 Apart from the dead side branches of the River Rhine, there was no real lake in the vicinity of Wesel. It appears to me that the things one does not have exert a certain attraction that one often finds hard to resist. So despite nagging doubts that in the light of the hard facts we had made a poor choice about our camping destination, our decision to go there was irrevocable. Who would have thought it possible that I would have considered taking a train to go camping? Was it not totally insane to trade a peaceful refuge in the forest for the hustle and bustle of a noisy commercial campground? The Rhine was filthy and burdened with chemical pollutants that came from the Ruhr industrial area, to which we were planning to go. With the economic recovery of West Germany came the demand for energy. Mining for the high-quality anthracite coal was in high gear bringing work and prosperity to the region, albeit at a price. On windless days the coal dust polluted the air. Dirt and grime covered walls, lawns, and even the wash that women hung up to dry. Yes, it is hard to believe that Helmut and I actually went, where – as people who knew the area around Essen warned us – the sun would seldom completely break through the gray cover of a leaden sky. 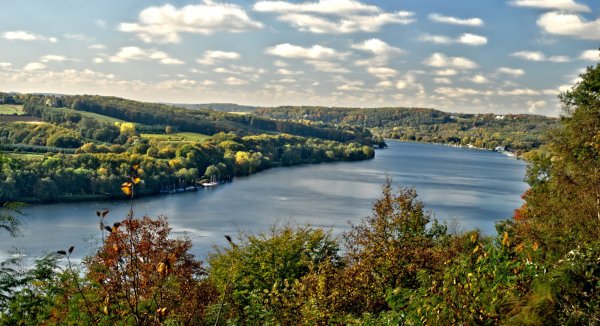 So it came to pass that on the late afternoon of June 9th, 1962, two young men carrying heavy backpacks and holding a two-man tent between the two of them arrived at the Baldeney Lake campground. Helmut and I were pleasantly surprised to view scenery quite different from what we had anticipated to find. The sky had cleared from the cleansing action of an early morning rain. There was not even a layer of industrial haze left to obscure the blue sky. The sun shone brightly, the trees were in full leaf, the lawn impressed us with its light-green spring verdure, best of all the brilliantly shining lake reflecting the blue sky created an ambiance we had not expected in a park south of the city of Essen. Since it was still early in the season and only a few hardy people had ventured out to camp, we had no trouble finding a suitable site near the lake shore to set up our tent. We enjoyed an early supper, which I had prepared from a can of chunky soup and had heated it up over my gasoline fueled camp stove. We spent the evening listening to pop music from my transistor radio and taking in the lush-green trees and bushes that the locals call the green lung of the Ruhr region. The only reminder that the black gold was mined north of here deep down from the rich coal deposits came when we looked at the dark soles of our feet black from our bare-foot walk through the park.

Next morning after a frugal breakfast with cereal and milk we pulled out our air mattresses into the brilliant morning sun. We relaxed reading, listening to music from Radio Luxembourg and watched people saunter by on the way to the beach. Two men, one in his early sixties, the other a little bit younger than I, caught our attention as they brought two of those so-called folding boats down to the lake shore. They can be easily transported on buses, trains, and even in the trunk of a car, because when folded together they easily fit into a large duffle bag.

Biene and her Dad

For lunch I opened a can of sardines, an excellent staple for people like us traveling on a shoestring budget. Helmut having relied on me in charge of the provisions grumbled about the meal that consisted only of slices of dry bread and fish. In the meantime the boaters had returned to their tent with the folding boats. As we found out later, they were Herr Panknin and his son Walter. It seemed strange to us that they had nothing to eat and just sat there as if they were waiting for something. That something was obviously food. For now at a distance we noticed two persons approaching the camping area. As they came nearer, they turned out to be a woman and a young girl carrying baskets filled with delicious food perfect for a picnic in the sun. Enviously we looked on, as Frau Panknin and daughter Gertrud with a rather curious nickname Biene (Bee in English) unpacked the mouthwatering content of the baskets. We could see that this was culinary heaven on earth, Schlaraffenland, as a German fairy tale by Grimm so aptly describes the land, where people eat the finest delicacies in gluttonous quantities without having to work for them.

Twin Brother Walter with one of his Model Airplanes

What attracted me to this family, however, was not so much the food, which in comparison to our lunch was so alluring, but rather that pretty seventeen-year old girl whose first impressions on me provided a good match with the image of idealized beauty that had been growing in my mind for the past two years. Biene, from the moment I cast my eyes on her, radiated a charm whose magic did not depend on bracelets, earrings, and similar outward adornments, not on make-up or perfume, which I rightly or wrongly loathed as poorly disguised cover-ups, but rather on the very lack of all those artificial means. In short, I gazed in admiration at the girl of my dreams. 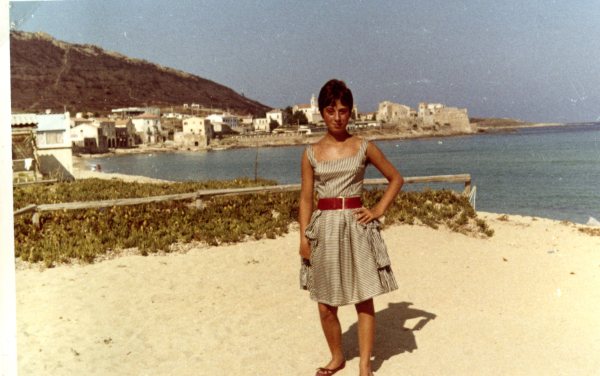 Biene at the Mediterranean Sea

Helmut and I were watching Biene and her twin brother play badminton in the open field. There was no net. The game was not very competitive. Its objective was to set new records by counting the number of times the birdie would fly back and forth before hitting the grass. Suddenly the idea occurred to me that we all could organize a mini-tournament with two pairs competing with each other for the highest score. After we had introduced ourselves, I explained the idea of a badminton tournament to be played with two pairs. Seeing that this would add a little bit of excitement, Walter and Biene readily accepted the proposal. As I had secretly wished, Biene wanted to form a team with me. I no longer recall how many rounds we played, but Biene and I always succeeded in getting the greatest number of hits. We were both very competitive, but the success in the game depended on complete cooperation. We felt good about our victories over our rivals and even more so, because we had won them together.

It was only a matter of time, until the topic of the folding boats would surface in our conversation. Walter suggested going for a ride on the lake. Herr and Frau Panknin voiced no objections, indeed they were happy to see their twins go boating and at the same time having a little bit of peace and quiet. Somehow Helmut had managed to partner with Biene, which at first made me feel quite annoyed. But he argued convincingly that it was now his turn, since I had spent so much time playing badminton with her. As I was paddling with Walter, I soon got over my disappointment. Full of enthusiasm for his hobbies, Walter talked about his model airplanes and ships that he had been building. That was quite a pastime for Walter and took a lot of time, skills and dedication to bring a building project of this kind to perfection. I thought that just as Walter needed to have a plan and all the parts ready before he could even begin, so did I going through the same process in building a working radio. The moment Walter mentioned that he was thinking of using radio controlled devices to direct his model in the air or on water, I got quite excited and told him about my electronics projects, especially about the tube driven transmitter that provided musical entertainment to my friends in the apartment block in Wesel. Having found an area of common interest, we paddled less and less vigorously and talked all the more enthusiastically not realizing how fast time had been slipping by. When we pulled the boat ashore, we had already exchanged addresses and promised each other to mail each other schematics of electronic circuitry. Of course, what Walter did not know was that I had established a link to Biene, a connection that went beyond mere electronics. Like in an electric current, which the battery is pumping through a circuit providing energy and action to its individual parts, so warm feelings were flowing through my heart in the belief that Biene may have taken a liking to me during our badminton contest with Walter and Helmut.