For one semester I wanted to go to Paris and had booked a flight for August 29, 2006. unfortunately, I arrived at the airport on August 30. I missed my plane and booking a another flight would have been incredibly expensive. So I decided to take the bus instead. On the day in the evening I boarded the bus and arrived in Paris on the Saturday of September 2. For the first little while I was supposed to stay with a friend of my friend’s father, who lived in the northern suburb of Paris.

Having been sitting in the bus all through the night I was pretty tired. Nevertheless we drove all the way to the southern part of Paris, where there was an impossible disco. There was also Régis, because an acquaintance of his wanted to go there too. He too thinks that the disco is impossible. 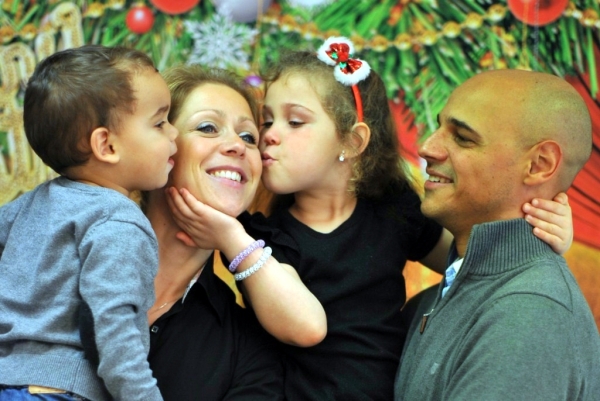 Johanna and Régis with their two children Alice and Maxime

Well, there we met for the first time. I spoke very poor French, but we made arrangements for a date to meet the very next day at 3 p.m. “au pied de la Concorde” without exchanging our telephone numbers. And indeed we both showed up the very next day. Régis showed me Paris and since then we have been a couple for almost ten years and have two wonderful children.