From Graduation into Carnival

When school continued in the first week in January, I avoided all distractions and focused all my energies on last minute studies. By now the school administration had let us know the subjects and topics, in which we were to receive our oral examinations. For me it was Charles V in History and Calculus in Mathematics. In the remaining four weeks I emptied an entire bottle of vodka, which one could take as evidence for my industriousness. I rarely missed to fulfill my daily work quota. Indeed I would go sometimes overboard and even skip my time for relaxation with guitar or harmonica. One morning I woke up late. I was shocked to discover that I had forgotten to set the alarm clock. School had already started, so I quickly jumped into my clothes, grabbed my books, and without having had breakfast I raced to school in record time and barged into the classroom, where my homeroom and German teacher Herr Aufderhaar had just begun a lesson on German romanticism. Because he was bald and also taught religion, we had given him the nickname ‘Kahler Jesus’, which means Bald Jesus in English. He took one look at me and instead of being angry about my tardiness showed remarkable understanding for my circumstances. He teased me good-naturedly and remarked to the entire class, “Klopp is not just late for class. He did not even shave!” 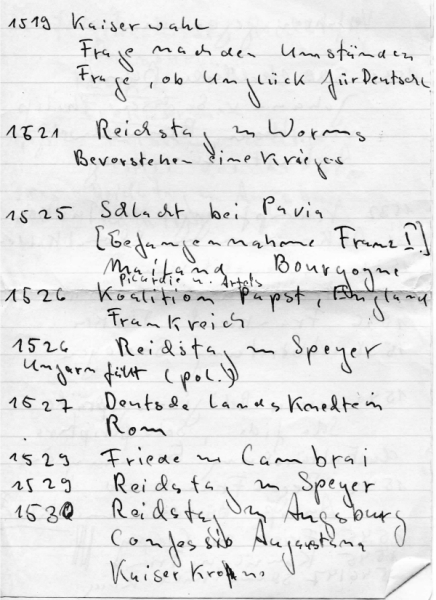 My Notes on Charles V

For the oral exam in History I was well prepared. The main topic that I was given was the era of Reformation with special consideration to the way Emperor Charles V dealt with the schism that threaten to tear apart the Holy Roman Empire of German Nations. I had about thirty minutes to write down a few notes for my presentation. Then when my turn had come and I was led into the somber exam room, I described in poignant details the political struggles of the emperor against France and the Turks and the frustrations he, as a good catholic, experienced with the rapid spread of the protestant revolt against the corrupt Church of Rome. I was no longer the timid student who once stood trembling with fear in front of our history teacher. I boldly and convincingly expounded all the pertinent factors that determined Germany’s future historical and religious landscape. I took the entire time allotted for the oral exam. So the committee of principal and teachers had no time to ask any unsettling questions at the end. I walked away with the confident feeling that I had consolidated my satisfactory standing in History. Also in Math I was able to prove that I deserved a better final grade. My task was to find a solution for the total amount of work required to dig a cylindrical hole of a certain depth. Herr Müller, my beloved math teacher in the senior division, guided me through this difficult problem of integration. He so cleverly posed the right questions that they contained valuable hints allowing me to bring the session to a successful conclusion. It would have been nice to express my gratitude to an excellent teacher some fifty years later. Unfortunately, while I was searching the school Website I found out that he had passed away the year, before I started to write our family history.

Front Page of my Graduation Diploma

With the prestigious graduation certificate (Abitur) in our possession we had access to many postsecondary programs offered by the German universities. As for me, two years of military service at the Bundeswehr (West German army) had to come first. In those days it was still possible to enlist as a volunteer for a period of 24 months instead of the mandatory 18 months with the advantage of receiving a handsome salary, becoming an officer of the reserve, and being able to choose an army unit in keeping with one’s technical abilities. I opted for service in the signal corps, a choice that definitely reflected my interest in electronics and communication technologies.

Newspaper Clipping with Names of the Graduates

It so happened that the graduation exercises had ended exactly at the start of the carnival season. Being together one last time with my friends and classmates, before we would scatter into all directions, I made full use of the golden opportunity to celebrate the great milestone and to lose myself in the relaxed atmosphere of the dance hall, forgetting the trials and tribulations before graduation and not worrying for the time being about the future. When the time of drinking, dancing and attending late night parties was over, I was physically exhausted, but for the moment I felt free as if a heavy burden had been taken off my shoulders. 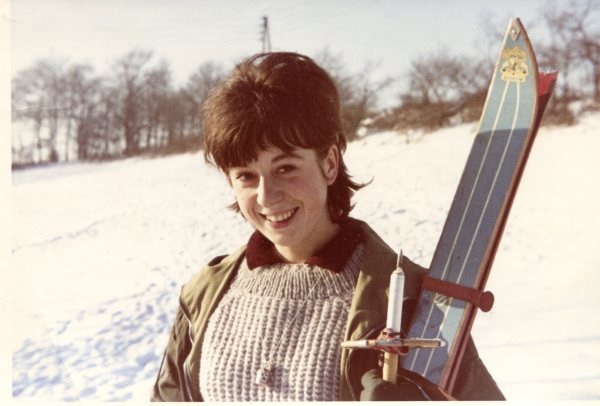 Biene with her first pair of skis – Winter 1963

I had not forgotten Biene. Now with more time at my disposal I wrote her a letter bringing her up to speed on my success at school and the tumultuous days at the carnival festivities. But what mattered the most I found the courage to express my feelings about what was so special about her in my mind. At the campground in the spring the year before I had discovered in her appearance the natural beauty that needed no cosmetic enhancement with rouge, lipstick or artificial hair color. Biene for me embodied the ideal image of a girl. In the letter I gave her my father’s address hoping that she would reply.