The soldier is the Army.  No army is better than its soldiers. The soldier is also a citizen. In fact, the highest obligation and privilege of citizenship is that of bearing arms for one’s country.

The train wound its way through the picturesque Lahn valley to my destination in Koblenz, where I was to receive my basic army training. I had celebrated my 21st birthday in the new home that Mother, Aunt Mieze, Uncle Günther, Aunt Lucie were renting in Watzenborn-Steinberg. After the traditional coffee and cake party we played several rounds of our favorite card game ‘Doppelkopf’ in the evening.

Aunt Mieze was not fond of playing cards, so I had become a valuable game partner now and for all future occasions when I came for a visit. My aunt would rather sit a good distance apart from the noisy bunch in an easy chair and read a book. Often she would fall asleep in spite of the racket we made around the card table. Then the book she was reading would slip out her hands and fall on the wooden floor with a loud thud. Mother suggested to her to go to bed. However, she rather wanted to have the feeling of being part of the family than to give in to nature’s urgent call to sleep. Now on my way to the barracks I had the train compartment all to myself and while passing by ancient castles on the hillsides above the lazily meandering river below I had time to contemplate about the military service that I was about to render to my country. I was now of age, had the right to vote, could do things on my own, I was free, and yet, as I was approaching the city of Koblenz, I felt that I was not. I had simply traded one set of responsibilities for another. And I wondered whether that would always be that way. 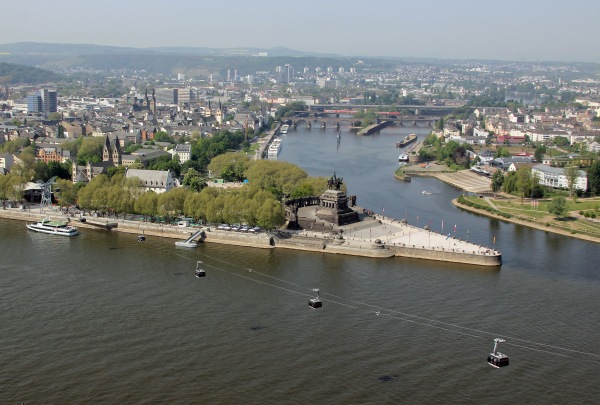 In the early afternoon of April 1st I walked through the barracks gate carrying my suitcase with the few personal belongings we were allowed to bring during the training period. After I identified myself to the guards on duty as one of the new recruits, I proceeded to the building, where I was told I would find further instructions on the bulletin board located on the ground floor. There were about a dozen buildings all in the nondescript shape of rectangular boxes placed around a huge yard that served as the ‘playground’ for the military practice and drill sessions. The entire area was almost devoid of people. The previous generation of soldiers had been successfully ‘calved’ and been transferred for further training to the three major technical companies of the Signal Corps located in the city. Expecting the place to be brimming with activity where there was none gave me an eerie feeling as if I had erred perhaps on the start-up date or worse had fallen victim to a nasty April Fool’s trick. When I looked through the names list of some 120 men, I found it somewhat reassuring that Klopp was indeed on the roster. I even had a rank, which I shared with the other newcomers. From now on until I had advanced to the rank of a private, I would be Fu Peter Klopp, Fu not standing for a four-letter word, but rather more appropriately for ‘Funker’ (radio operator). I was assigned to Room 203, which meant Room 3 on the second floor in the three-story building. The extremely wide staircase surprised me and I wondered about the waste of space until I discovered that there was a method to the madness of the architect’s design of the overly generous width of the staircase and of the hallways. How else during an alarm could 120 soldiers rush out of the building in the required three minutes? 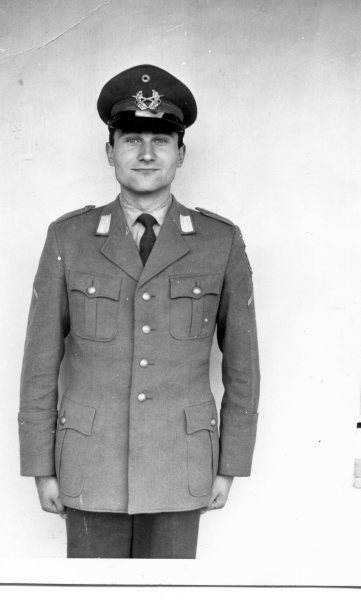 Peter as Civil Servant in Uniform 1963

I was the first to enter Room 203. Although later on I had sometimes regrets about my eagerness to report for duty, my early arrival had the advantage that I could pick and choose the best location for my bed and closet. The room was definitely not set up for comfort. In the middle of the austere room stood a long table, around which 15 chairs were placed. Five bunks with three beds each were pushed against the walls. Each soldier would have for his personal belongings, army clothes and equipment a lockable wooden closet. The placement of these lockers was such that they formed a partial visual barrier between some of the bunks, thus granting a modicum of privacy. I chose the bottom bed of the bunk nearest to the left window and the closest locker for easy access. I was happy about my choice. The window would provide fresh air and the bottom bed would to some modest degree protect me from the disgusting bodily fumes permeating the entire room, especially after the soldiers returned from the local pubs, where low quality beer was being served.

I opened up the closet and stowed away my clothes, toiletry items, Mommsen’s ‘History of Rome’ and a few other books, which I intended to read during the weekends, during which we were not allowed to leave the barracks. There was plenty of room left. The empty shelves were waiting to be filled with army garb from the quartermaster on the very next day. When my belongings were neatly put away in the closet, I locked it securely with a padlock. It was considered just as great a crime to tempt your fellow soldier with an unlocked closet, as it was to steal from it. I put a pocketbook on the pillow of my spartan bed as a sign that I had claimed it as my own. Then I went outside and enjoyed sitting on the retaining wall of large circular pond in the late afternoon sun watching as the other recruits came trickling in at first, then eventually swelling to a human flood, as the deadline of the arrival time was rapidly approaching. Today we were still civilians. Tomorrow we would be soldiers wearing uniforms (derived from Latin ‘una forma’, meaning one form, one shape), individuals still on the inside, but a gray mass of young men pressed into the same mold of dress code, rules, military routines and activities. With the total uniformity of regulated daily life came the assault on our individuality with its profound effect on character and soul. Life in the army became the crucible, in which our character was put to the test, and for me, even though very painful at times, the process brought about refinement, which prepared me well for the many challenges further down the road in my personal life.