Near the end of the week Harry,Gary, his permanent farm hand, Chris, the young boy from California and I were relaxing in the living room sipping cool beer straight from the bottle. Harry suggested that it was time for a break and that we should all go together to a remote lake in the Rocky Mountains, where he knew a good fishing spot. That was indeed good news, for I longed to be back in the mountains and fishing would be another skill I could acquire while enjoying nature at its best. The time before the harvest was relatively easy for the wheat farmers on the Prairie Provinces. They often took their vacation in July or August to rest up for the hard work that lay ahead, when they had to bring in the crops. For harvesting, timing was everything. If you harvested too soon and the grain had not matured properly, the wheat board would downgrade the quality. If on the other hand you waited too long and let the rain and sometimes even early snow dampen the grain, you would again not get top dollars for your harvest. Harry had $20,000 worth of high quality wheat growing all around his farmhouse, the equivalent of ten times the amount in today’s buying power.

Bright and early on Saturday morning we were heading out to the Rocky Mountains. Harry had hitched to the truck his travel trailer, which comfortably slept the four of us. After a three-hour drive, he turned off from the main highway. Somewhere up a steep forestry road Harry knew a good fishing lake surrounded by snow capped mountains. Very few people dared to venture out so far into the wilderness. As it turned out, we would have the rustic campsite right at the edge of the lake all to ourselves. There was nothing to set up. Harry unhitched the trailer and blocked the wheels, while we helped by unloading the two boats off the truck and dragged them into the water. After a quick lunch consisting of bologna and cheese sandwiches, we were eager to try our luck in fishing. 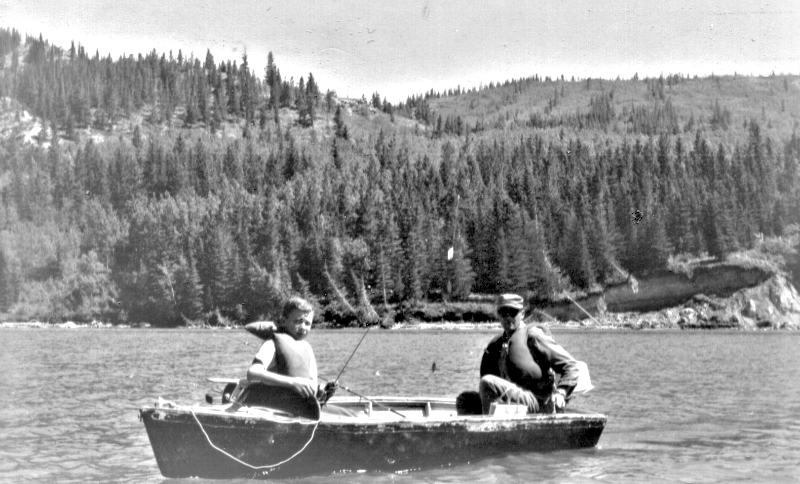 Harry took Chris, his young guest from California along and directed his boat across the lake to a promising spot, where he had been fishing in previous years. Gary and I decided to make a circle tour hugging the rugged shoreline in the hope to reel in a good-sized trout or two. My interest in fishing was at best lukewarm. In my mind I saw me actually catch a fish, kill it somehow, and wondered how I would clean and make it ready for supper. Suppressing these disturbing images I focused on the beauty of mountains all around us, the crystal clear water reflecting the majestic scenery in the still mountain air, and the bright blue of a cloudless sky competing with the dark green curtain of the impenetrable forest. The eyes of the scout in me were searching for suitable sites, where one day Biene and I could set up our little tent, here perhaps a bay with a sandy beach, there a small rocky island with a single spruce tree for protection and shade. A tug on my fishing rod pulled me out of my daydream. 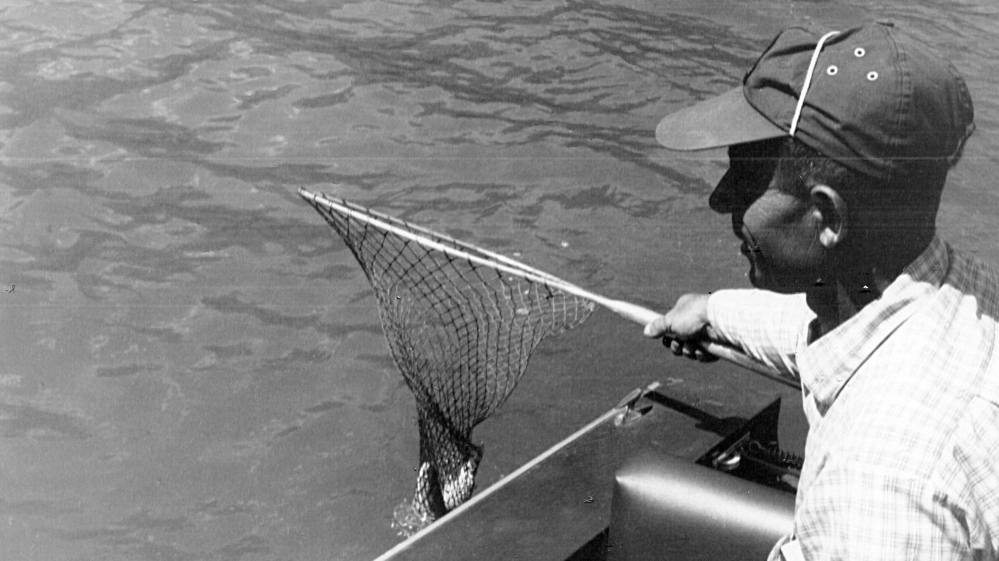 “Peter, I think you’ve got a fish on your line,” Gary said and stopped the outboard engine. Then giving me clear and simple instructions he guided me step by step in the fine art of landing a fish in the net. It was a medium sized trout. Gary grabbed it and through its gills he threaded a piece of nylon line, which was tied to the boat. Then he threw it back alive into the water where it would stay fresh and would not spoil on deck in the hot afternoon sun. This practical approach to fishing seemed cruel to me. Why not kill it immediately, I wondered. But my interest in fishing got a little boost with my first catch ever. After Gary had restarted the engine, I cast my line with greater enthusiasm, . Soon after I felt again a tug and pulled in another trout. Before we had finished our circle tour, I had altogether caught three trout and Gary always too busy with the outboard motor nabbed only one. When Harry and Chris returned from across the lake, we counted six beautiful trout weighing a little under a pound each. Chris. barely able to hide his envy, commented, “Beginner’s luck!” So it was. The greenhorn from Germany had provided half the amount of meat for supper tonight. 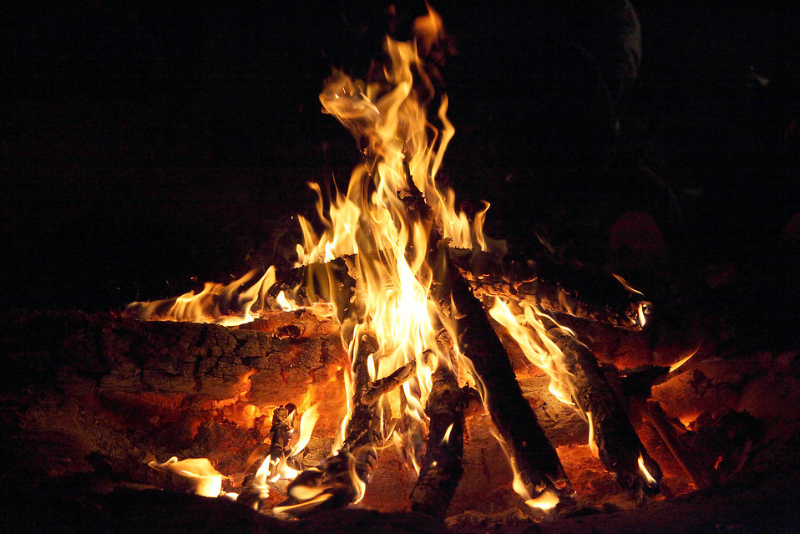 Fortunately, I did not have to kill and clean the fish. Harry and Gary took care of the messy job. They also looked after the cooking. I volunteered to make a fire. While I gathered rocks to build a safe enclosure, Chris helped me pick up dry twigs and branches from the forest floor, which he chopped up into small pieces with a hatchet. Soon we were ready to start the fire. I placed some birch bark in the middle of the fire pit. Then I built around it a cone of thin twigs with thicker, longer ones on top. I held a burning match close to the birch bark and said, “A good scout knows how to start a fire with only one match, even when it rains.” Almost instantly the flame fed by the oily substance in the bark spread quickly through the twigs. The crackling sound and the flames shooting higher and higher indicated to all that the one match experiment had been successful. Chris and I brought out four lawn chairs and kept feeding the fire with bigger branches to make it ready for cooking. By now Gary had wrapped the trout in aluminum foil and suggested to let the fire burn down a bit so that the meat could be baked on the ember. Harry came out of the trailer with a large frying pan filled with cut-up baby potatoes. In no time at all a tantalizing aroma spread around the campfire and made our mouths water. A cynic would have quoted the old adage, ‘Hunger is the best sauce.’ Indeed, we were ravenously hungry. But in the great outdoors, where likeminded people gather around the campfire, a simple meal with just a few ingredients, such as freshly caught trout baked in butter, baby potatoes fried in vegetable oil, ketchup for extra flavour, and a cool beer that was in fact all we needed for total and complete satisfaction.