Home is people. Not a place. If you go back there after the people are gone, then all you can see is what is not there any more. Robin Hobb

At the time of my birth, Father as manager and inspector was in charge of the estates Silberberg, Oberhof and Gutfelde totaling an area of approximately 3000 ha. Although he must have been thankful to the authorities for landing him such challenging and prestigious position and therefore may have harbored a favorable disposition towards the Nazi regime, he always strove to keep his humanity in dealing with his fellow human beings, Germans and Poles alike. In particular, through his actions he distanced himself from the policy that forbade German citizens to fraternize with the defeated enemy. It is a great testimony to his moral independence from the dark and sinister sides of Nazi Germany that he allowed Polish men and women to live and work closely and cordially with the Klopp family at the Gutfelde residence and the agricultural headquarter for the region. He maintained an excellent working relationship with the former Polish estate manager Haluda, who after WW2 took over as director of the communist run state farm. From the stories I picked up from my mother I speculate that Father owed his survival to his reputation of treating fairly and equitably all the people who worked for the large estates under his directorship. Other inspectors notorious for their arrogance, cruelty and injustice in dealing with the Polish population were rounded up, lynched, hanged or shot in the closing months of the war. On a  Polish website with special focus on mansions, manors, and castles of Poland, I found an entire page devoted to Gutfelde – now an agricultural training center with orchards, wheat and corn under cultivation, 800 cows and 8000 pigs. The same page to my great surprise mentioned my father’s name as an administrator during WW2! The mansion-like imposing building was built around 1880 in the late-classical style and consisted of a body with a higher wing and ground floor extensions. It has not changed much in the last seventy years.

My three brothers Karl, Adolf and Gerhard and my sister Eka (short form of Erika) (now Lavana) were all born in Pomerania, whereas I began my life’s journey in the town of Dietfurt (Znin), Warthegau. There I spent the first eight days with four other babies in a warm hospital room. There were also two Polish babies born in the same county hospital. Later on in my early childhood I had to take quite a bit of good-natured teasing with made-up stories of a nurse who had accidentally placed a Polish baby into my crib, while I was being examined in another room. 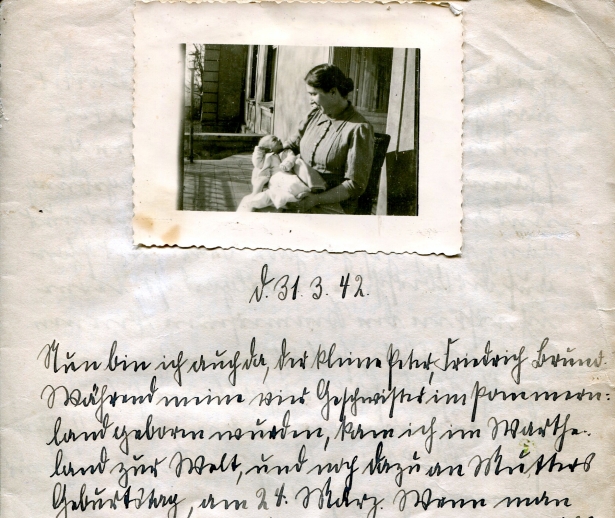 First Page of Mother’s Diary about her Fifth Child Peter

When I arrived with Mother at Gutfelde, I received a truly royal reception. Karl, who attended a boarding school in Belgard (Bialogard), would see me a few months later at the beginning of his summer holidays. But the others including my proud father did everything to welcome the fifth child in the family. Flags were waving. Fir branches and a big welcome sign decorated the door to my very own room was. Inside the sunny and warm room several pots with beautiful flowers created a cheerful atmosphere for the latest arrival in Gutfelde. END_OF_DOCUMENT_TOKEN_TO_BE_REPLACED