A Tractor Snowplow Crossing the Lake

Also, as the lake froze over in the winter, mail was transported by horse and sleigh from Burton over the ice.

Needles had also been a logging centre. In 1922, it had a large log flume for logs that ran for four miles from the Whatshan to the Arrow Lakes, at one place where it crossed the road it was 12 feet above. 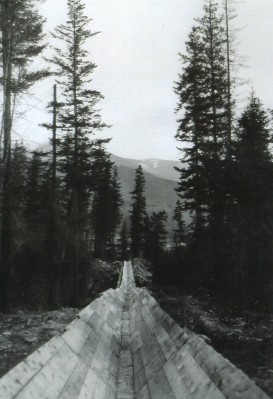 Due to the flooding of the Arrow Reservoir the town site of Needles no longer exists. However, the properties both north and south above the high water line are still occupied. 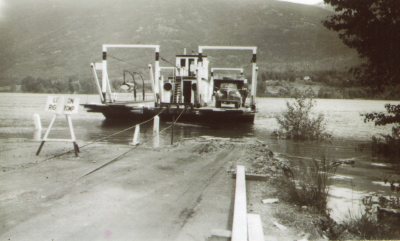 As reported the first ferry to cross the Arrow Lakes between Needles and Fauquier was a 6 HP launch in 1919. In 1922, a raft towed by Mr. O.J.Aspinall’s rowboat was used. By 1924, hourly daily service was started by Mr. George Craft consisting of a boat for foot passengers and a raft for vehicles powered by a small boat called the “Kathleen.” In 1928, Claude Rollins was engaged to give better service with a larger boat. In 1931 a three-car ferry was installed. 1941 saw an eight-car cable ferry put into use. As the years went on, the increase in traffic warranted larger ferries and more hours of operation. 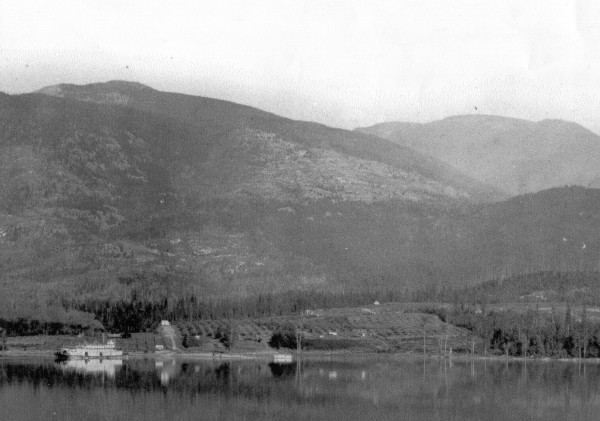 Fauquier with its Large Orchard as Seen from the Needles Side