The Good Samaritan of Room 203

By the beginning of May the intensity of military training increased dramatically. We were going on long marches clothed in battle fatigues carrying heavy equipment on our back and the rifle slung over the shoulder. During the training exercises we were crawling through dirt and mud on elbows and knees. All such activities plainly showed that the honeymoon was over. It is said that the best sleep is the one before midnight. One night we had just fallen asleep, when a piercing whistle blow in the hallway ripped us out of the deepest slumber.

“Get up! Hurry! Muster completely dressed in combat uniform!” Threatening voices were echoing through the hallways. The lights had been switched off. It was pitch dark. If you ever tried to get dressed in complete darkness, you will know the state of utter chaos and confusion we found ourselves in. There were quite a few soldiers who pulled their boots on their bare feet, because they could not find their socks. After three minutes we lined up at the courtyard in a relatively straight line with helmet, rifle, and full marching gear. 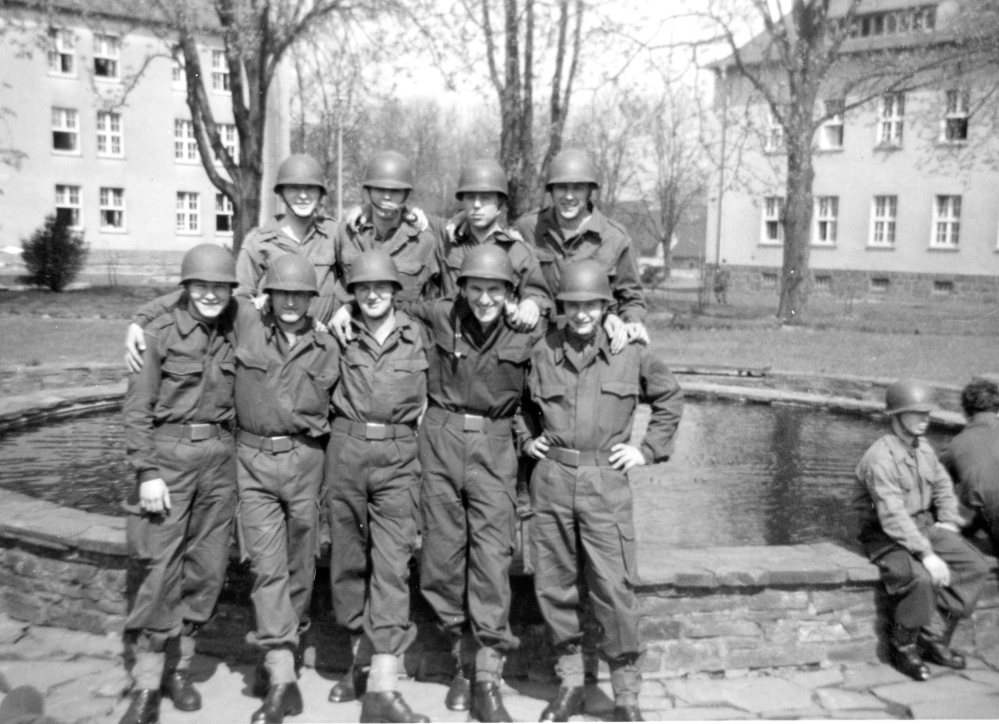 “Back in three minutes in your sports attire!” shouted the sergeant. Then we knew that this was going to be one of those ridiculous chicaneries that had no value except perhaps to test our willingness to obey without questioning orders no matter how senseless they appeared to be. The masquerade, as we would call it, lasted till one o’clock in the morning leaving us only a few hours of sleep. The very next morning we marched to a remote hill near the Moselle river where we ‘practiced’ the fine art of lying down and getting up and similar grotesque exercises. Like the rest of my comrades, I found them very tiring and annoying. 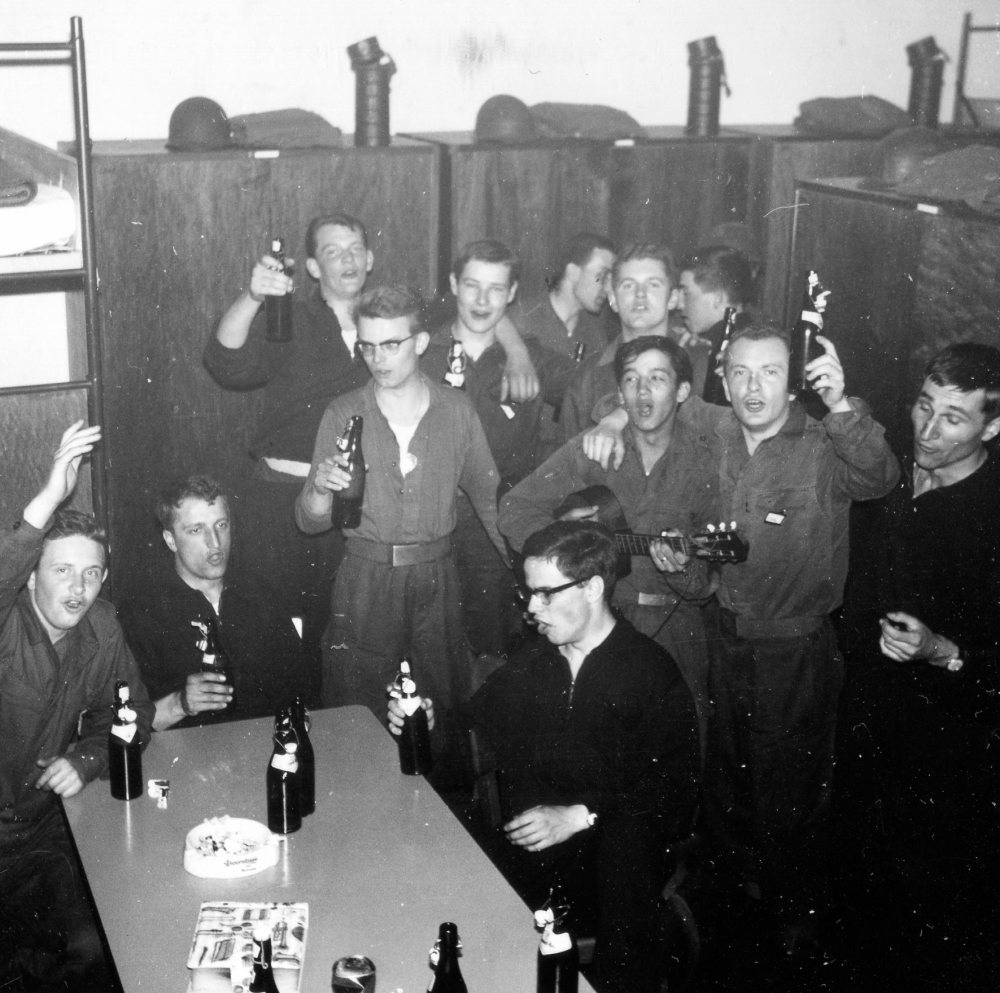 More enjoyable for me were the long marches. We had learned a large number of marching songs. They were peppy, they had rhythm and with their frequent reference to a soldier’s sweetheart tended to romanticize the otherwise unromantic world of army life. They lent to a marching column of soldiers the spirit that brought joy and strength to endure the drudgery of marching for endless miles in the heat and dust of the country roads. To make sure that the entire company would know which song to sing the soldier on the left in the front row would holler at maximum volume the title of the song, which would be repeated by the men behind him, until it had reached the very end of the marching column. The soldiers at the rear would then shout, “Song through!” That was the signal to all to start singing on the next step. The singing soothed the strain of the march, alleviated the fatigue, and let us forget the pain and discomfort of the heavy load on our back very much like the spirituals once providing relief to the black slaves working in the cotton fields of colonial America. 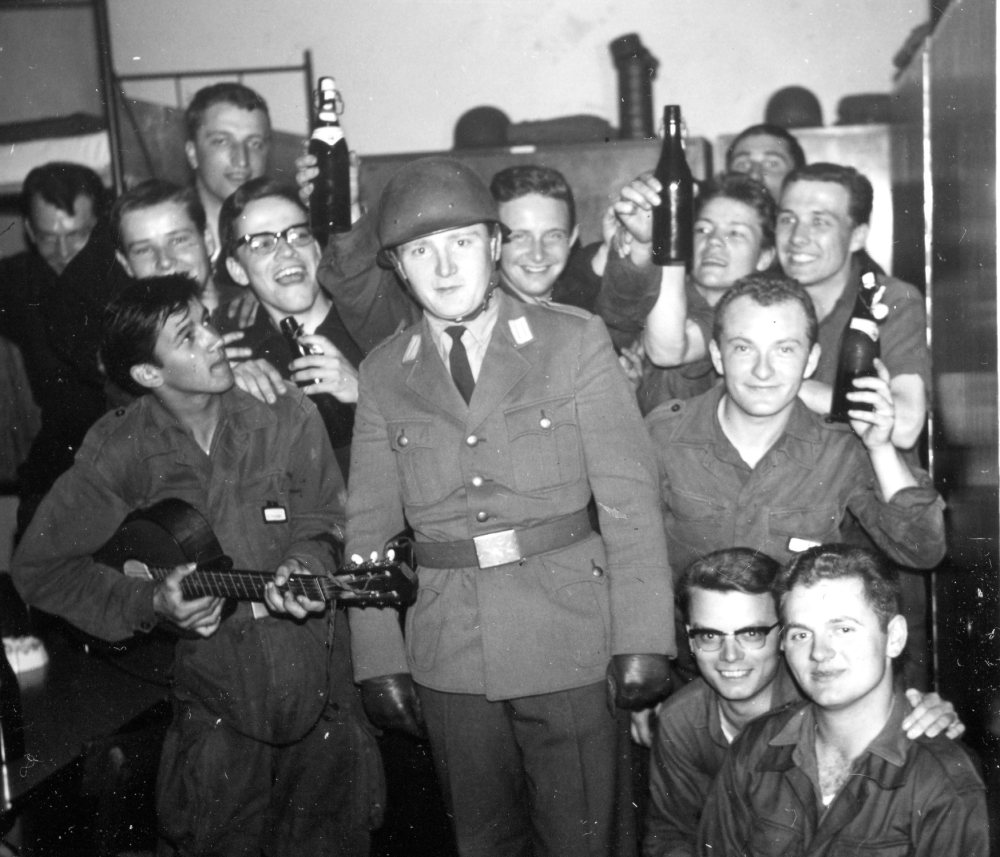 After such ordeals we frequently had a party in Room 203, seeking comfort in the merry companionship enhanced by drinking copious amounts of the cheap Koblenz brew available in the large half liter bottles. We sang our favorite army songs and shared the latest jokes not necessarily all clean. The corporal responsible for order on the second floor would occasionally join us and in my view was a freeloader with easy access to free beer. A roommate who had been barhopping returned just as we were cleaning up. He was so intoxicated that he could barely stand. The ten o’clock deadline was approaching, at which time we all had to be in bed except for the soldier on duty that week. The room had to be spick and span for the upcoming nightly inspection. Since the party had produced quite a mess, we all chipped in and helped to wipe the table clean, removed the empty bottles, and swept the floor. Meanwhile our drunken comrade barely managed to slip into his pajamas and then with great difficulty crawled into his bed, which fortunately was at the bottom of the bunk. The corporal who had participated in the drinking and carousing was grateful enough to overlook a multitude of infractions against the rules of cleanliness, such as the ashtray that someone had forgotten to empty. He had just closed the door to move on to Room 204, when a retching sound came from the corner, where our intoxicated friend had rolled out of his bed and fallen limply onto the wooden floor with a dull thud. He was unable to get up. The room was swirling around him. He made a desperate attempt to crawl on all fours to the door hoping perhaps that someone would be so kind to open it for him. He badly needed to go to the bathroom. But it was too late. He gagged in convulsive spasms. The stomach could no longer hold its disagreeable content and ejected it like in a violent volcanic eruption. Presently the stench of the vomit permeated the entire room. If we had not become somewhat accustomed to other unpleasant smells, of which beer farts were the worst kind, we too would have been sickened by this odoriferous environment. Horrified by sight, sound and smell we lay frozen in our beds and did nothing. How quickly could the boozer have received help, the floor cleaned up and the room aired, if we all had been ready to help? Then a miracle of tender love for one’s fellow human beings unfolded before our very eyes. The violinist – I later called him the Good Samaritan – climbed down from his bunk, opened his closet and took out some towels and a washcloth. From the bathroom down the hallway he brought a pail of water. Within the next few minutes he had the poor fellow all cleaned up, had helped him into a clean pair of pajamas and had gently heaved him back into his bed. Then he opened all the windows, wiped the smelly vomit with his own towels off the floor, went back to the bathroom to return the pail and wash up. Finally he came back and quietly climbed into his bed. From that night on, my friend, the violinist had gained my highest respect and admiration for the love that he had shown to one of his comrades of Room 203.