My grandmother Johanna attended a teacher’s college in Stettin. Her hometown was Hirschberg in the Giant Mountains. Her father, the headteacher Ludwig Engel, had chosen this institute of higher learning, because in contrast to all the others only female students were educated here. Now it so happened that a young customs officer by the name of Bruno Kegler was a guest at her cousin’s place. On the wall of the apartment hung Johanna’s picture, and Bruno curiously asked who she was. He was being informed, and he in turn asked if he could pass on a greeting to the cousin. He was permitted to do so. When Johanna during her semester break was at home in Hirschberg, she received one day a letter with a strange handwriting with the even stranger address, “Dear honorable Miss!” She laughed and showed the lines to her parents. She read out that the writer had requested a meeting with her so he could pass on her cousin’s greeting. Father Ludwig immediately said, “You will write that there will be no such meeting, because you happened to be in Hirschberg just now.” Johanna sat down at once and wrote her refusal on a tiny little letter card. The envelope landed into the mailbox, while her father was overseeing it from the balcony, and Johanna contentedly spent the rest of her vacation.

When she was back again in Stettin, Bruno wrote another letter to Hirschberg, The letter was opened, but at least was forwarded to Johanna in Stettin. It contained the repeated request to pass on the greetings. Johanna showed the message to her classmates, who warned her about the forceful handwriting. Nevertheless she responded to the letter and gave a time and place, a café, for the date. All her classmates wanted to come along!

As a sign for recognition Bruno had indicated that he would wear a gray suit with a white carnation in the buttonhole. Johanna wanted to wear a white dress and a white scarf.

When she showed up at the appointed time in the café, she saw … two gentlemen in gray suits, and nobody had a white carnation in the buttonhole! But one of them rose, walked up to her and introduced himself – and it was like if they had known each other for years.

For Johanna a wonderful time now began. They saw each other as often as they could; they went on hikes together and enjoyed steamboat excursions.

To the two old ladies, from whom he was renting furnished accommodation, Bruno said already after their first date that he had just got acquainted with his future wife. Without saying anything to Johanna he wrote to her parents, described his economic status and his family and asked to pay them a visit. That being granted, they met and got to know each other, and on April 29th, 1930, Johanna and Bruno got married. They were a very happy couple and consolidated their happiness with the births of their children Hartmut, Elisabeth and Jürgen. 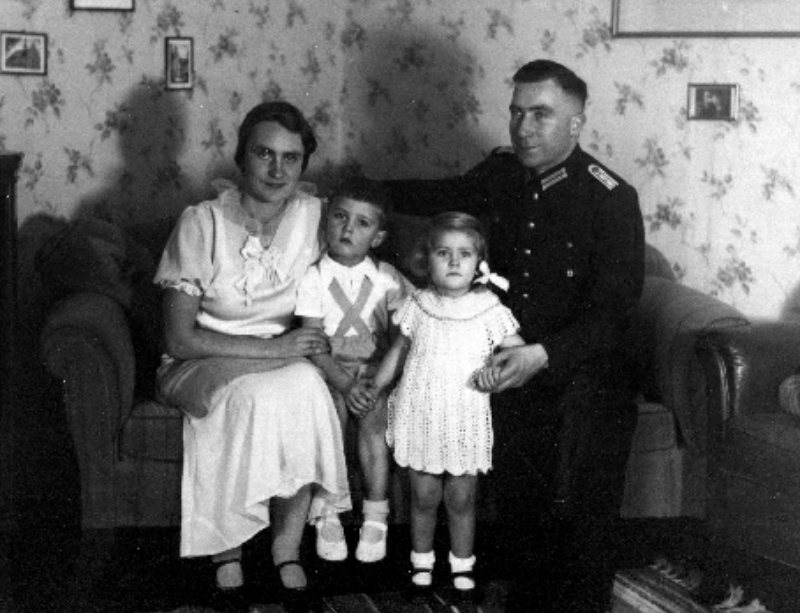