One Drink Too Many

When I returned from my brother’s wedding, I resolved to be more goal-oriented, to study hard, to raise myself above mere mediocrity to an academic achievement I could truly be proud of. On the wall hung the work schedule, which I had imposed upon myself outlining a rigorous timetable: getting up at six, attending school from 8 a.m. to 1:30 p.m., taking some time off till three, doing homework and studying till five. After supper followed another two hours of intensive study. I had a lot of catching up to do. An hour before it was time for me to go to bed. usually around ten o’clock, I critically reviewed my day. And if according to the work schedule I had passed the test, I rewarded myself (and only then) with a small shot of vodka and let the pleasant warmth penetrate my body as a form of instant relaxation. The master allowed the slave to temporarily forget the self-imposed burden. At moments like these I would grab my guitar, play a few simple classical pieces composed by Carulli, or take out the harmonica and strike up a potpourri of folksongs, pop music or my favorite scouting melodies. 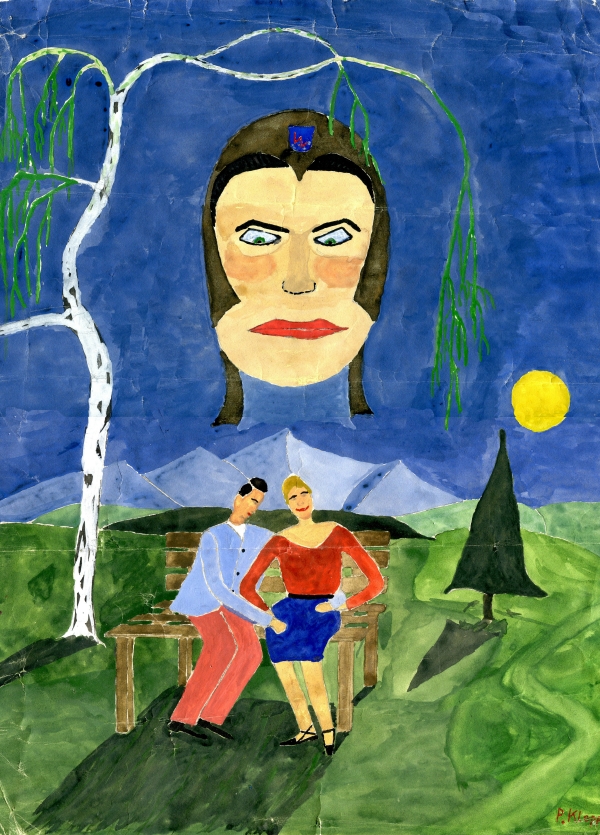 At times when I felt in a creative mood, I would open the metal box with a dozen or so water colors and try my untrained hands to paint a picture often with a futuristic theme inspired by my voracious reading of science fiction novels. One picture (see above) depicts a romantic scene showing a young couple sitting on a park bench under the light of the full moon. High above the horizon towers the head of a helmeted space woman of a distant century in the future, whose envious eyes are glaring down on the romantic couple below.

Wilhelm, my classmate, came to school from a neighboring town. His father produced apple juice, with which he tried to compete with the popular Coca Cola product that was making economic inroads into the German beverage market. Wilhelm once demonstrated in our school how corrosive coke was by filling two glasses, one with his father’s apple juice and the other with coke. He then threw an iron nail into each glass. In the following week, when we entered the chemistry lab, we were astounded by what we saw. The nail in the glass filled with coke was completely encrusted with rust, whereas the one in the apple juice was still shiny and unaffected. However, we failed to see the connection to the possible ill effects that the popular drink might have on our sensitive stomach linings.

It was about two weeks before Christmas, when Wilhelm came up to my apartment and brought me a 10-liter jug of apple juice. I placed it on the hot water radiator. Without the aid of a wine making kit with its expensive accessories we embarked on producing a cider by letting Mother Nature do the job. After only a few days I could report to my friends in school that bubbles were rising in the bottle, a certain indication that the process of fermentation had begun. Hans, Helmut, Wilhelm and I were already looking forward to our Christmas break party with the potent apple wine in the making. Soon the bacteria finding ample food in the juice and turning the sugar into alcohol multiplied a million times over generating CO2 at first weakly fizzing, then growing into a crescendo very much like the sound of rushing waters. Finally the bacteria had done their duty, and the homemade cider was ready for the party. School was out. In the New Year the final race would come to the finish line. The dreaded written and oral exams were looming on the horizon. So we four all felt the need to let go and put aside for a while our worries and graduation blues. I had put the jar outside into the wintry air on the balcony to chill the brew into a refreshing drink. We made ourselves as comfortable as possible in my tiny room. My three friends were sitting on the couch that converted into a bed and I sat on the only chair at my desk, whose prominent occupant was the giant jug with its delicious content. I poured the cider into coffee mugs. There were no glasses in the mini-kitchen. At first we had a serious talk about our plans for the future. The classroom genius Hans wanted to enroll at the Marburg University to study nuclear physics; Helmut, the lawyer’s son, was seeking a position in economics; Wilhelm planned to embrace a teaching career, and I had set my eyes on becoming an electronics engineer specializing in high frequency technology.

I poured us another cup of that deceptive cider that tasted like a refreshing fruit drink but carried a powerful punch. Hans tuned my guitar and starting picking a few melodies. Most Siemens workers in the building had gone home to their families. The apartment building was almost devoid of people. So there was nobody we would disturb with our singing. After another cup we had reached the point where singing had become the necessary ingredient for the continued success of the party. The vocal chords well lubricated by the smooth drinks were ready to metamorphose us into a cheerful bunch of young men.

To the great delight of my friends, after we had gone through our favorite scouting and traveling songs, I offered to sing a spiritual to express my sentiments over our oppressive teachers in school: “When Israel was in Egypt’s land, let my people go. Oppressed so hard, they could not stand …”, which I sang with the deepest voice I could muster without floundering. Now Hans injected rhythm into the life of the party and played masterfully one of the Flamenco style pieces with the beats being pounded vigorously on the guitar body. “That was the rendition of our friend and maestro worthy of another drink”, I said. By now the content of the 10-liter jug had dropped to about the halfway mark. Suddenly Helmut got up and said he had to go to the bathroom. The way he staggered into the hallway made it clear that he had already had too much to drink. Someone said, “I hope he’ll find the toilet in time. He looks ‘blau’ (German slang for drunk) to me!” Now one must know that in Germany you locked the bathroom door with a key. Poor Helmut must have taken it out and dropped it on the floor. All of a sudden we heard him call, “Let me out! You locked me in!” We rushed into the hallway and tried to convince him that he was the one who locked himself in and that he would have to find the key. “It is not in the lock”, he complained.

“Then it must be on the floor. Look for it”, we replied. Finally he located the key. What came next is incredible. Helmut’s level of intoxication was so far advanced that his eye-hand coordination was severely hampered. He was unable to insert the key into the keyhole. Imagine the hilarious scene, in which we three friends tried very hard to give him directions how to put the key into the hole. I was just about going to call the janitor for help, when Helmut managed to open the door. He looked pale and disgruntled, whether it was out of embarrassment or intoxication, we could not tell. Without saying good-bye he took his coat and left. Needless to say the bathroom incident had put a damper on the jolly time we were having. Nobody felt like having another drink. The party was over.