There is a tide in the affairs of men.
Which, taken at the flood, leads on to fortune;
Omitted, all the voyage of their life
Is bound in shallows and in miseries.
On such a full sea are we now afloat,
And we must take the current when it serves,
Or lose our ventures.

Travel Preparations and a  Farewell Speech on a Vinyl Record

The day after Biene had returned home, Adolf took my sister Eka and me on a whirlwind tour to Berlin, where we saw for the last time Aunt Alma and her family. On the way back we dropped in at the apartment of our brother Karl in Braunschweig, where he had recently embarked on a banking career at a local bank. There in the beautiful apartment we spent a few days with our brother, his wife Ingrid and their little baby daughter Annekatrin.

Back at home we directed our attention to the task of getting our belongings packed and ready. Our tickets for the voyage to Canada included the shipping charges for the wooden crates that contained all our personal effects. Almost too late we found out that we were responsible for moving them to the travel agency in Giessen. Almost instantly arose a heated argument among the hot-tempered siblings, myself included, as to whose fault it was for having overlooked such an obvious problem. Accusations were flying back and forth. It seemed that each one of us was on a faultfinding mission. Of course, no matter how hotly we debated the issue, the heat of the arguments would not move our big, heavy crates to Giessen.

Fortunately our cousin Jürgen arrived just at the right time and helped diffuse a potentially explosive situation. He suggested a cooling-off period for the enraged brothers. In Giessen we dropped in at the ‘Vienna Forest, a popular restaurant, where they served us grilled chicken and beer. Tension and lingering hostility abated quickly at the same rate as our stomachs filled with delicious food and copious amounts of beer. Now we were ready to tackle the shipping in a more amiable environment. Jürgen had just made the acquaintance of a fellow student, who would be willing to provide his old and dilapidated VW bus for the crates. After a few more drinks at a roadside fast food outlet we were going to announce the good news at home. However, the pub, ‘The New Homeland’, was still open in Watzenborn. We thought a few more beers would not hurt and would definitely clear away the last little bit of rancour, before going home. So we finally arrived in a fairly boisterous mood. Everybody had already gone to bed. But this did not prevent us from loudly announcing to Eka that we had found a solution to the shipping problem. We all withdrew into the furnace room, which with its excellent sound-proofed walls offered a modicum of protection against the noise. Befuddled by all that beer I played the guitar rather poorly often missing the correct fret, while Adolf sang the song merrily out of tune with the chords I was playing. In the meantime  Jürgen and Eka had an animated discussion on the poor timing of our nocturnal arrival. Not receiving the appreciative reception that we were expecting, we decided to spend the night at Jürgen’s place in Giessen and slept for want of something more accommodating all three in one bed, but not before having a taste from the bottle of whiskey that happened to be there for this crazy occasion. Next morning (or was it noon?) Adolf and I, feeling somewhat remorseful for our rambunctious behaviour the night before, drove home quite willing to accept any criticism with a repentant heart and to make amends by getting the crates ready for shipment. 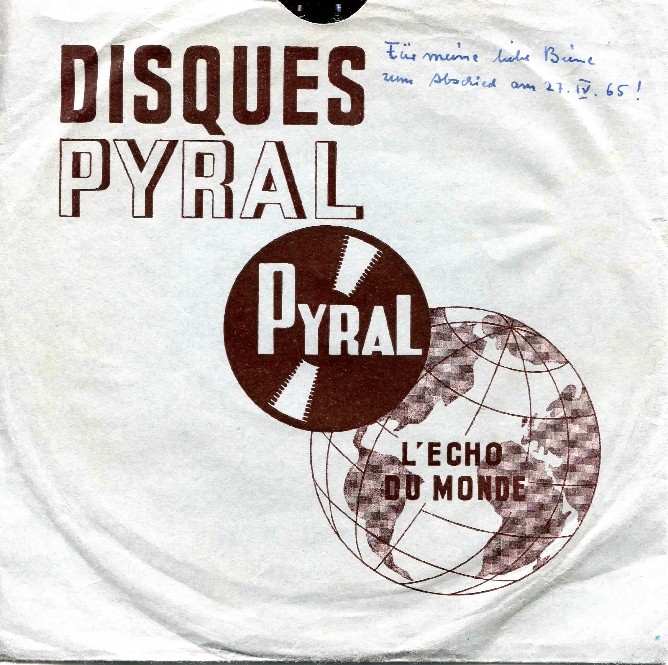 In the turmoil of the endless visits of well-meaning relatives and friends, who all came to say good-bye, I still managed to keep up the correspondence with Biene, although it was almost impossible to find a quiet corner in the house. I had  made a recording of a few simple classical guitar pieces that I felt were good enough for her to listen to. In addition, I recorded a farewell message on tape and mailed it together with the music to a company in France to have it pressed onto a vinyl record. A few days before our departure date the record arrived, which I embellished with some pretty labels and redirected it to Biene’s home address. It so happened that on the very day we boarded the Canada bound vessel, the ‘Ryndam’, she received my gift.

The recording sounds a bit scratchy. But what do you expect from a 50-year old vinyl record?