Fauquier Preempted in 1897 by Funk Brothers

One of the new town sites on the Arrow Lakes, due to the Arrow Dam Reservoir, is at Fauquier, called New Fauquier . This name never got into real use (PK). It is situated above the high water line laid out on part of the farm land mentioned in the following article, written ten years ago.

The new settlement is a modern village with sewers, lots and the streets all engineered to separate the residential areas from business and services area, to make an efficient and attractive community. We print this story as a tribute to the early settlers of this area and to wish them well in the new town.

Canada celebrates its centennial this year, so I will endeavor to relate the history of our community. Prior to 1895 there were no settlers in Fauquier. Trappers and prospectors built cabins and stayed for a while, then moved on. Names mentioned by old timers are P. Anders, Jim Kelly, Muirhead, Jim Bates and Dougelle, who staked a mining claim on Stor Hill. The little cabin he built near the beacon point is still standing.

In 1897 Leonard Funk and brother George came from the Okanagan and preempted two large blocks of land. They built a cabin by the lake and began clearing, cutting trees into the cord wood, which they sold to the CPR for use in their wood-burning boats. George Funk did not stay, but his brother Leonard carved a fine farm from the forest, planted an orchard and raised a large herd of cattle, becoming a fairly wealthy man. He did much to help his neighbors get established and was a prominent figure in community affairs until his death in 1935.

Two other settlers of 1897 were Mr. Mosheimer who stayed only a few years and Mr. Thompson who preempted a half section of land next to Mr. Funk. He also bought the mining claim from Dougelle. When his sons joined the army in 1914, the family moved away.

Jim Kelly mentioned previously homesteaded the original Fauquier farm. He sold to Muirhead who in turn sold to Mr. Fauquier in 1900. After acquiring three more lots Mr. Fauquier called his holdings the Needles ranch. This property he had surveyed into ten-acre blocks, the work being completed by A. H. Green in 1910. Part of Mr. Green’s payment was a choice lakeshore block, on which he built a summer home.

At this point it might be of interest to tell a little about Mr. Fauquier. He hired Indians to clear the land on both sides of the road, approaching the landing. He built a fine home hiring two Chinese to care for the house and the gardens. Incidentally, this house burned and the family moved to a little cottage on the north side of the road. In appearance, Mr. Fauquier looked like a country squire, florid face, and gray hair, neat clipped moustache always dressed in natty tweeds. He had fine horses and drove an elegant buggy with a fringed top.

He planted a large orchard and while waiting for it to come into production he put in acres of raspberries and strawberries. Between the sale of land, fruit and cattle, he should have been successful but his extravagance exceeded his income and he died a poor man in 1917. Mrs. Fauquier was a semi- invalid and recluse. After spending her last years in a wheel chair she died at Vancouver in 1929.

The years 1900 to 1910 brought a number of homesteaders among them Schlag, Matz, Oswald, Gebert, Spiller and Funk. The first three moved away, Mr. Funk died in 1911, Mr. Gebert in 1915 and Mr. Spiller stayed on doing much for the community until his death in 1954.

After the survey of the Needles Ranch in 1910, there was quite an influx. First to arrive were Aspinall Boden, Reid and Burkmar. Then the Baileys, Lowders, Hartlands and Smedleys came. Mr. Smedley built a general store,which he operated until 1923 when illness of his wife forced him to leave.

About this time a school was needed and the people built a log school under the direction of Mr. Funk, Mr. Gebert and Mr. Spiller who were also chosen to be the first school trustees. Furnishings for the building were financed by dances and basket socials. School opened in 1912, teacher was Miss Madge Timeaus of Nelson. Enrollment was over 20. Around 1912 construction was started on the road north to meet the Burton crew building south. Foremen were Jim Riley who built most of the local roads and Mr. Conway. A sorrowful incident happened in 1915 when Mr. and Mrs. Bailey and daughter Ivy on their way back to England were lost with he sinking of the Lusitania. 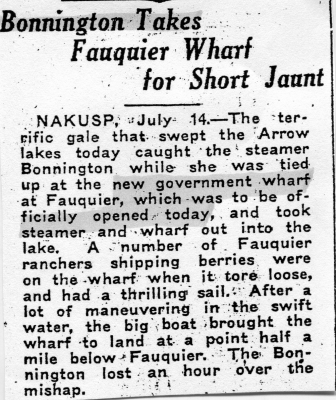 After Mr. Fauquier’s death the farm was put up for sale. In 1920 Mr.E. Kendrick, bought the part south of the road and the Cutting brothers the north portion. The same year Mr. Gaustin and family arrived and Mr. Scribe bought the Thompson farm. During the twenties fruit-growing reached its peak. Hundreds of crates of cherries, plums and small fruits were shipped, also many carloads of apples. The beach landing no longer sufficed and a wharf was built. The growers formed a Coop and built a packing house. The dock was crowded daily during the summer with fruit, shippers and onlookers who thrilled at the sight of the Bonnington, with passengers lining the rails of both decks. This was Fauquier during its heyday.

The thirties brought hard times, and fruit-growing came to an end. The packing house stood idle until 1942 when it was given to the community to make a hall. The orchards were neglected and some of the best farms became vacant. Newer residents have established homes but most of them are dependent on logging or other outside employment.

Much more could be said of the trials, efforts and resourcefulness of the early settlers, but I hope the outline given will be of some interest.